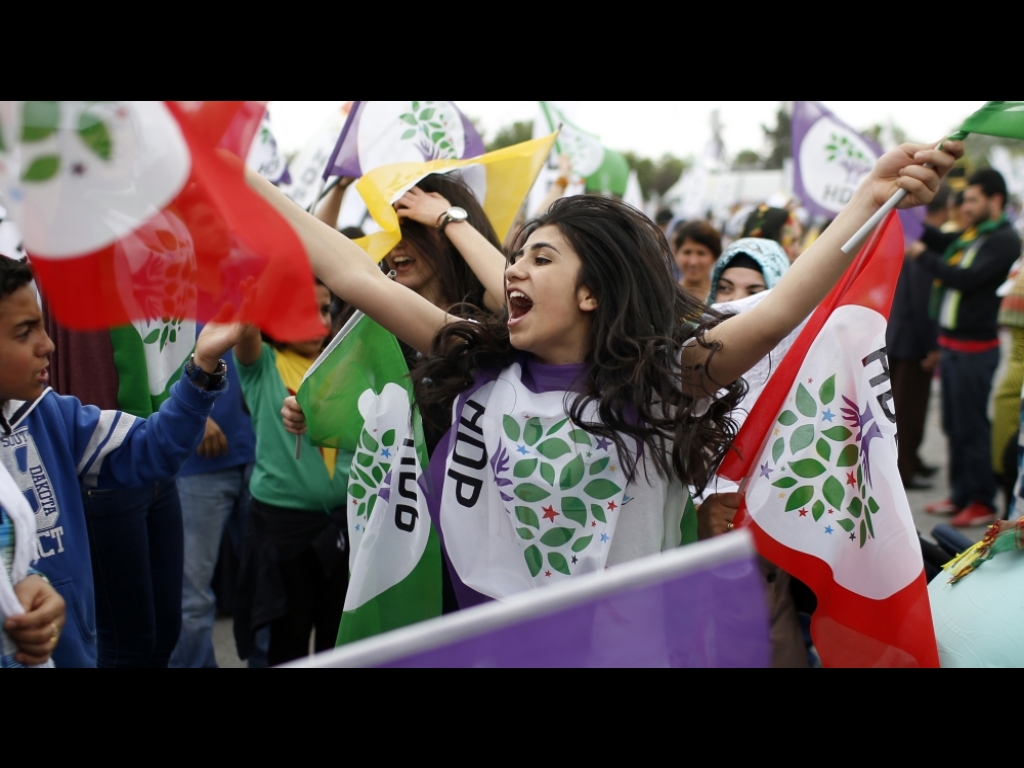 In March of this year, the Turkish Constitutional Court launched a trial to ban the political left wing, the Peoples’ Democratic Party (HDP). HDP is the third political force in the country, and is the only one that advocates a peaceful solution to the Kurdish issue in Turkey. In connection with the impending ban of the left-wing Democratic Party of Peoples (HDP), known for its active policy of protecting the Kurdish population of Turkey from government repression, the Kurdish issue will no longer be positively supported in the political field of the state by any political force. The ban of the HDP, which was preceded by the arrests of its activists, which continue to this day, openly testifies to the brutality of the Turkish regime, its authoritarian, in fact, fascist character. By prohibiting HDP, Turkish neo-imperialism not only bans the Kurds from entering the political arena, but also begins a new large-scale repressive stage. However, this is a continuation of the political trend of the modern ruling class in Turkey. Its upcoming step to ban the Democratic Party of Peoples is logical within the framework of a chauvinistic nature, which has begun to prevail in the Turkish state. This trend has a historical tradition that is characteristic of Kemalist fascism and its current successors.

The Kurdish population, heroically defending their right to exist in Turkey, is once again made clear that they not only have no right to participate in politics – they have long ceased to have the right to speak their language, live their culture and remain themselves, but now on the political stage, they will not have a legitimate protector. The Democratic Peoples’ Party (HDP) was founded in 2012 as the political wing of the Democratic Congress of Peoples (DPC), a coalition of socialist anti-capitalist movements. The DKN included the Kurdish Peace and Democracy Party, the Socialist Democracy Party (formerly a faction of the Freedom and Solidarity Party), the Green and Left Party of the Future, the Trotskyist Revolutionary Socialist Workers’ Party, the Marxist-Leninist Socialist Renaissance Party, the Maoist Labor Party, and “Socialist Party of the Oppressed”, a number of left-wing radical and feminist groups, trade unions, organizations of ethnic minorities, including Pomaks and Armenians.

With the upcoming ban on the party, whose activities are called “pro-Kurdish”, Erdogan’s inhumane regime is preparing to officially seal the end of political pluralism in Turkey. In fact, since its inception, the HDP has been subjected to all sorts of attacks: the offices of the party have been looted, militants and representatives of the security forces have been attacked by people who took part in peaceful rallies of the HDP. Attacks by nationalist militants on party activists and deputies took place throughout its existence; thousands of them are imprisoned, election campaigns of HDP are blocked, mayors nominated by HDP and elected by the majority in some cities are dismissed and imprisoned for ten or more years. More than ten HDP deputies were deprived of their electoral mandate …

However, the prohibition of left-wing political parties, parties expressing the interests of national minorities, as well as attacks on their activists, is an ancient, very Turkish “tradition”. Now all Islamists and the extreme right agree with her 100%, which was to be expected in a country based on almost a century-old Kemalist fascism. Thus, the official demand to close down the HDP party, led by the Kurds of Turkey, is no longer surprising, given that many Kurdish parties that preceded the HDP were banned by successive regimes, and no one expressed a desire to protect them, which should be typical for society. with at least some existing traditions of civil democracy.

On March 27, 2021, the Turkish Chief Prosecutor sent an indictment to the Turkish Constitutional Court with a request to start a trial to ban the only political organization advocating a peaceful solution to the Kurdish issue. Despite the fact that until recently, political analysts on political issues in the region called HDP the third most important political force in Turkey, the demand to ban its activities is only the latest act in an open war, during which thousands of party members were arrested, as well as most of the mayors – HDP members and 13 deputies.

As already mentioned, the closure of political parties that adhere to a non-governmental political platform, especially the left and parties of national minorities, especially the Kurds, is a long tradition in the modern history of Turkey. So far, the Turkish Constitutional Court has banned six Kurdish political parties. The first was the People’s Workers’ Party (HEP), created on June 7, 1990. The ban was joined by the ban on the activities of the Social Democratic Party – SHP, which was voted for in the 1991 general elections and which had 22 seats in the Turkish National Assembly, however soon, in July 1993, her activities were officially banned. Then came the turn of the Freedom and Democracy Party: founded in May 1993, it was banned in the same, 1993, in September, and after that the then Turkish government cracked down on the Democratic Party: in March 1994, the Turkish parliament lifted immunity from six of its representatives who became MEPs. They were later sentenced to 15 years in prison on charges of “terrorist activities.” On May 11, 1994, the People’s Democracy Party (HADEP) was founded, which took the place of the banned DEP. In the 1999 local elections, representatives of the Peoples’ Democratic Party took the seats of mayors and deputies in 37 municipalities located mainly in the region of Kurdish population. Its representatives won then also in seven large cities of Turkey. In March 2003, the Turkish Constitutional Court also banned HADEP, and the following year, in November 2005, the Party for a Democratic Society (PDS) was founded by the remaining activists of the banned democratic parties, whose candidates independently ran in the 2007 general elections, receiving 22 seats in the Turkish Parliament. The time of the prohibition of the activities that are gaining popularity PDS came almost immediately, after a year and a half – on December 11, 2009.

The series of bans on the activities of Turkey’s legitimate political parties, which are subject to the ban, will continue with the closure of the Democratic Party of Peoples, the decision on which is bitterly awaited by representatives of the democratic public remaining in the overwhelming minority who do not agree with the chauvinistic authoritarian course of the Erdogan government, which turns the Turkish population into obedient by all his political steps of the executors of the will of the victorious national Islamist force in the country.

Now, for the world community, not indifferent to the fate of democracy in Turkey, it will finally become clear that the inevitably subsequent ban on HDP activities in the near future is a logical continuation of the authoritarian tendency of the Turkish state, which has long openly said political forces disloyal to Erodogan’s course that they have no place on the political scene of the country. The fight against dissidents is the natural prerogative of an authoritarian nationalist state, as we can see in the clearest example of the brutal anti-Kurdish policy. The Kurdish population is deprived of the right to speak their own language, in educational institutions on the vast territory of the Turkish state, where the Kurdish population lives, the new generation is deprived of the opportunity to remain the successors of their historical cultural traditions, since the Kurds are not only a national minority, the existence of which, like others, for example – Armenians, the Islamist pro-Turkish elite does not want to see living as an independent nationality in this country, but they are also the only ones whose resistance to the repressive measures of Erdogan and other right nationalists, in terms of their power and organization of the resistant, national liberation struggle in conditions of total prohibitions, arrests and repressions, does not know another, similar example. The entire progressive community in the world sympathizes with the heroic struggle of the Kurdish people for their right to live peacefully in Islamist Turkey, without being subjected to genocide on ethnic and national grounds. Circumstances force the Kurds, who have not yet entered the liberation struggle for their rights, to continue to maintain their dubious status as a people colonized on their own lands. That is why an increasing number of Kurdish, and even a small part of the intelligent and ordinary Turkish population, comes to understand that as long as Kurdistan will remain occupied by the troops of the Turkish security forces, democracy in this country will be an empty word.

Not devoid of foresight of a certain type, the current leadership of Turkey seeks to fill the country’s political space with fictitious opposition forces that can confuse the consciousness of the population, for whom the multicultural tradition of existence remains natural, and repressive internal actions of the presidential apparatus and law enforcement agencies of the neo-osmanist Erdogan are seen as unnatural and unfair. The peasantry in the Turkish hinterland and on the outskirts of the state, accustomed to calmly and peacefully coexist, as a result of the existence of the poorest economically agrarian strata, exploited by the Turkish bourgeoisie, as a result of the realities of life, the traditions of good neighborliness to relate side by side to neighboring peasants, who are Kurds or Armenian by origin, sometimes – mixed, will be subjected to increasing propaganda Islamist and pan-Turkic pressure from both the state and its right-wing like-minded people. In this situation, the democratic political forces remaining in the minority, standing on the left, socialist political platform, should not rely on the parliamentary struggle, the free conditions for which will continue to narrow, but will increasingly be pushed into the political underground, which is the starting point of the awakening class-consciousness of the peoples of Turkey.