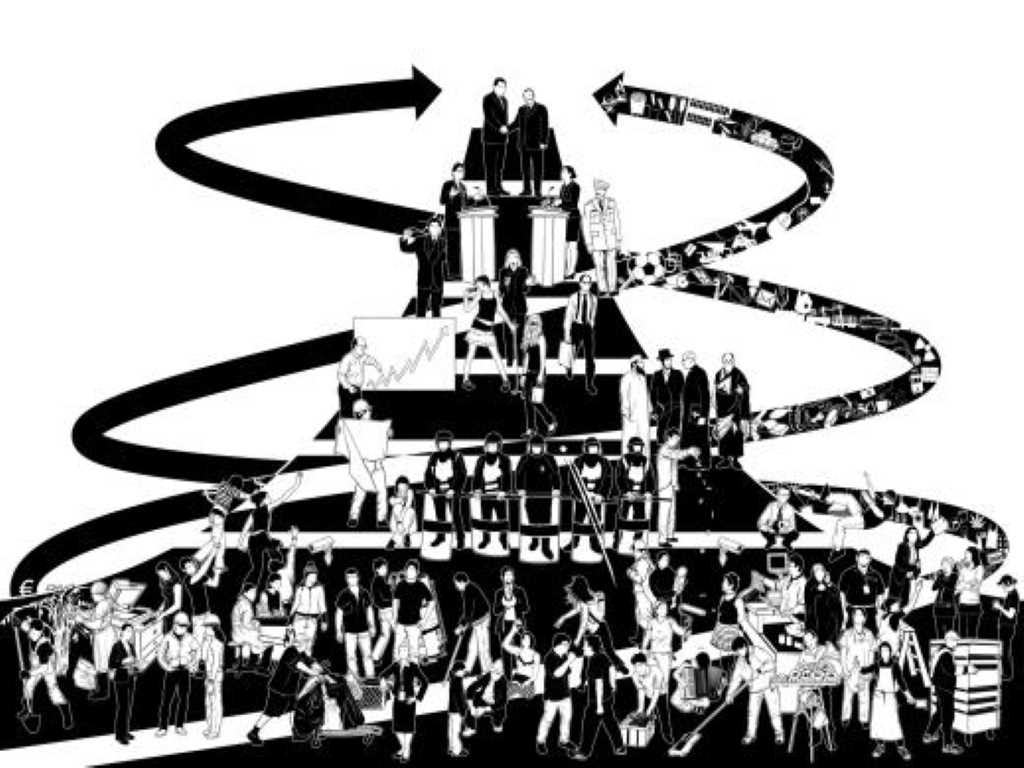 THE LEGAL PHENOMENON: THE WORKING POWER WAS DUAL IN THE WORLD

Our World needs a radical new model of internationalization and a new revolutionary policy that will promote the welfare of the working people throughout the world.
Until then, they will be deprived and deceived.
The Upcoming Rioting World should abandon the globalization model based on the Washington Consensus, which was once developed completely for another global economy.

Capitalism since its inception absorbs all spheres of social production, including the production of man himself:
“As soon as the conditions necessary for the emergence of capital matured, as soon as the laws of the movement of the capitalist mode of production were fully operational, this untwisted flywheel of contradictions could no longer be stopped. Capital as a giant vacuum cleaner began to draw in itself surplus labor, constantly expanding the sphere of its influence, capturing in itself the fragments of old social relations”.

The process of expanding the sphere of influence and “absorbing” surplus labor is the determining factor in the system of capitalist relations. The driving force behind this process is the contradiction between the desire of capital “to reduce the working time necessary for the production of goods to an ever-decreasing minimum, and, consequently, also the quantity of the productive population in relation to the mass of the product,” on the other hand, “to accumulate, capital, to assign as much as possible other people’s labor”.

The industrial revolution, the introduction of machines into machines and their continuous improvement in the 19th century. was a manifestation of this first contradictory trend of capital, radically transforming the world. Marx noted: “… the cheapness of the machine product and the revolution in means of transport and communications serve as an instrument for the conquest of foreign markets. Destroying there handicraft production, machine production forcibly turns these markets into places of production of the corresponding raw material. For example, the East Indies were forced to produce cotton for the United Kingdom, wool, hemp, jute, indigo, etc.”

In the XIX century. This contradiction was expressed in the industrialization of European countries and the emergence of “Third World countries lagging behind in development”. The latter have turned into suppliers of raw materials for the rapidly developing economies of the West. However, the change in the organic structure of capital towards an increase in the share of constant capital in comparison with the variable (now called the capital-labor ratio) in the core countries, led to a fall in the rate of profit. For this reason, capital began to look for more favorable options for investment in peripheral countries.

After decolonization in the second half of the 20th century, we saw the development of capitalism in the countries of the Third World and, as a consequence, the very recent historical destruction (beginning in the 1980s) of noncapitalist forms of economic management in India, China, Brazil and other countries, where millions of peasants joined the army of hired workers, selling their ability to work in numerous urban factories, factories and offices. This global replenishment of the world working class was supplemented by the inclusion in it of workers of the former socialist bloc. This manifested the second side of the contradiction, the capitalist form of labor organization, including them in the production system, makes their labor productive, bringing surplus value within the framework of capitalist production.

But the question remains open, but to what extent has the world proletariat as a whole increased? To give an approximate idea can the article by Freeman R. “What really bothers Europe (and America): the doubling of the global workforce.” The article was published in 2010, but the estimates in it are not outdated. The only thing that should be noted is that the article on the spirit is reformist, aiming to show ways to smooth out contradictions within the capitalist system, and not to eliminate them completely. Below is its translation.

How do workers from developing countries change the global economy?

The world economic community and those responsible for economic policy, both in governments and international institutions, have not yet fully realized the most fundamental economic event of the era of globalization – the doubling of the global labor force.

The doubling that I am talking about is the increase in the number of people in the world economy that resulted from the fact that China, India and the former Soviet Union are now included in market capitalism.

In 1980, the global labor force consisted of workers in developed countries, parts of Africa and most of Latin America. About 960 million people worked in these countries.

Population growth – mainly in poorer countries – has led to an increase in the number of employees in these countries to about 1.46 billion by 2000.
But in the 1980s and 1990s, Workers from China, India and the former Soviet bloc entered the global labor market. Of course, these workers existed before. The difference, however, is that their economies suddenly joined the global capitalist system of production and consumption. In 2000-2018, these countries enlarged the world army of labor by 1.47 billion workers – in fact, doubling the size of the labor force in the world. These new participants in the world economy did not bring significant capital with them, because they were poor or because the capital they had had little economic value. Using the Penn World Tables data, I conclude that the entry of China, India and the former Soviet bloc into the world economy reduced the global capital-labor ratio by 55-60%.

The capital-labor ratio is the most important factor determining the wages of workers and the share of capital. The more capital there is for each employee, the higher will be their productivity and payment. The reduction in capital-labor ratio on a global scale shifts the balance of power in the markets towards capital, as more and more workers compete for working with this capital. Even taking into account the high rate of accumulation of new participants – according to the World Bank, in China it is 40% of GDP – it will take about 30 years for the world once again to reach the past level of capital-labor ratio among the countries that previously constituted the world economy.

The presence of double the number of employees and almost the same amount of capital puts a lot of pressure on labor markets around the world. This pressure will affect workers in developing countries that have traditionally participated in the global economy, as well as workers in developed countries. Countries that hoped to grow by exporting cheap goods and using the same labor force should look for new sectors in which to move – if they want to do so within the global economy”.

Mexico, Colombia or South Africa can not compete with China in industry if the Chinese wages are a quarter or so of them – especially since the Chinese labor force is about the same as productive. The emergence of 1.47 billion new workers also exerts pressure on labor in developed countries. The traditional history of trade is that most workers in developed countries benefit from trade with developing countries, since workers from developed countries are skilled, and workers from developing countries are unskilled. But this analysis is becoming increasingly obsolete due to the huge investments that large developing countries make in human capital. China and India produce millions of college graduates who can do the same job for a much lower fee than college graduates in the United States, Japan or Europe.

By 2019, China will release more doctors of science in the field of science and technology than the United States. A huge number of highly educated workers in India and China threaten to destroy the traditional model of trade between developed and less developed countries. Historically, advanced countries have introduced innovative high-tech products that require highly paid workers and extensive research and development, while developing countries specialize in old production products. The reason for this was that the developed countries had a monopoly on scientists, engineers and other highly educated workers.

Since China, India and other developing countries have increased the number of university graduates, this monopoly on high-tech innovation potential has decreased. Today, most large multinational corporations have R & D centers in China or India, so the center for technological progress can change. Of course, the pace of technological catch-up growth will accelerate, reducing the leadership of developed countries over developing countries with lower wages. Business experts report that work in the field of information technology, which covers perhaps 10% of employment in the United States, can and will eventually be shifted to low-paid highly educated workers in developing countries.

If Russia still manages to bring its wild economic model – into an even more savage, – improved neo-liberal, labor market pressure on educated and skilled workers will grow. The entry of China, India and the former Soviet bloc into the world capitalist economy is a turning point in economic history. For the first time, the vast majority of people will work in the conditions of market capitalism, having access to the most modern technologies. Workers in these new countries entering the global capitalist system must make great strides in reducing poverty, as indeed happened in China and India over the past 10-15 years. But for workers around the world, this transition will be long and arduous – more grandiose than the transition associated with the restoration of Europe and Japan after World War II.

In developed countries, real wages and / or employment are likely to grow more slowly than in previous years. In developing countries, which have traditionally been part of the global economy, jobs in industry are under threat. They are likely to see the transfer of labor to the shadow economy with increasing poverty, as has happened in many countries. China and India themselves are likely to face problems. Inequality in China and the former Soviet bloc has risen unprecedented in economic history. Historically, inequality has been high in India.

A large number of rural workers in China and India can lose from globalization, and create a threat to social unrest, especially in undemocratic China.
What does all this mean for the people responsible for carrying out economic policies and officials of the World Bank and their colleagues in the International Monetary Fund? For a long time, the World Bank and the IMF, as a rule, blamed the economic problems on the lack of flexibility of the labor force and financially irresponsible governments with excessive spending on social protection systems and state intervention in the economy. The IMF, in particular, sought to protect capital, especially foreign, as is clearly shown by its actions in Argentina. But in conditions when the global labor force has doubled, capital can take care of itself.