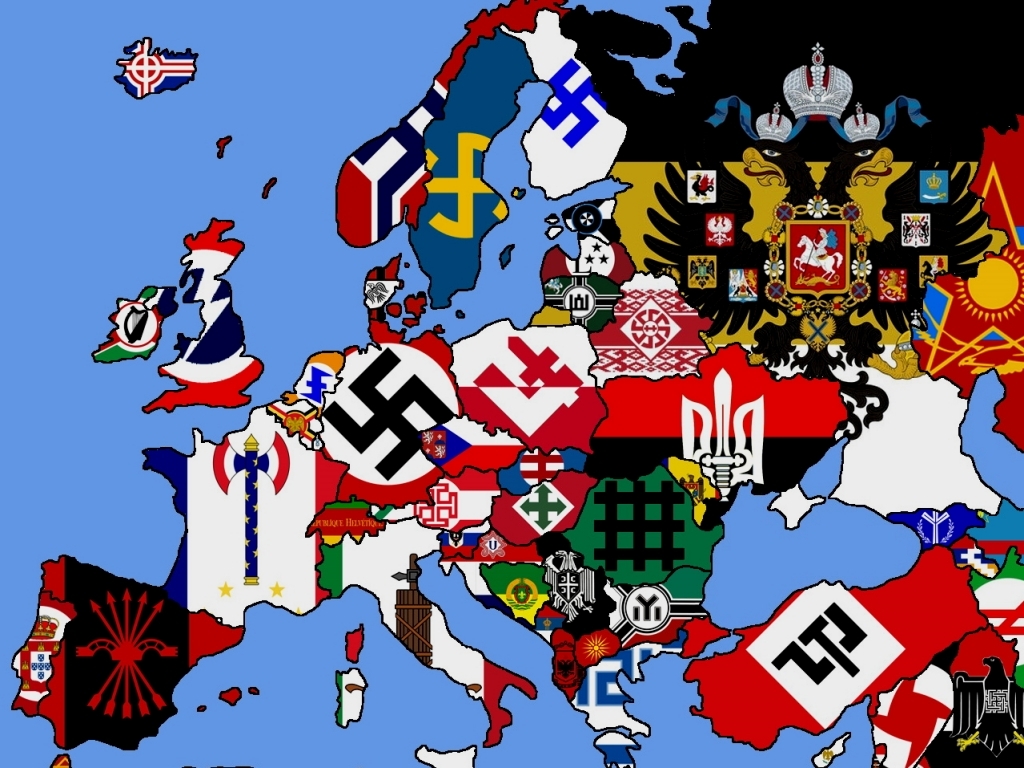 In today’s EU countries, nationalist movements are fighting against the weakening of nation states, which occurs as a result of globalization and the neoliberal vector in economics and politics, which led to the crisis of the G8 countries. The propaganda of national capitalism with populist features intensified as a result of the coronavirus pandemic, when the ruling elites of many countries went to extreme measures – to comply with the restrictions caused by the growth of infected people in all areas of social life, the Leviathan-State introduced measures that limit the freedom of citizens to the utmost, which are fixed constitutionally and must be protected by EU law.

Currently, the activities of such European ultra-right forces as the Alternative for Germany (Alternativ für Deutschland (AfD), the Danish People’s Party (Dansk Folkeparti), the True Finns party (Perussuomalaiset), the Austrian Liberal Party FPÖ ( Freiheitspartei Österreich), Vox in Spain and the Hungarian Civil Alliance (Fidesz-Magyar Polgári Szövetség), as well as the French National Front (now the National Rally). All of these political formations put forward right-wing conservative slogans and have programs based on from the populist rhetoric of which their representatives are conducting a legitimate political struggle – “against the liberalization of international circulation of capital, deregulation of markets, the loss by states of their former ability to regulate economic and social life in the interests of supranational or transnational organizations, deterioration of national cohesion as a result of the aggravation of social and spatial inequality marriage”. In reality, they are absolutely post-Nazi parties. Very often overlapping, inclusive, – with the international ultra-right international project “The Movement”, whose shadow headquarters are located in Italy. There are ideological followers of The Movement, founded by the generators of a conservative influential group capable of financing it, in almost every country in the world: as, for example, in Brazil, the adult sons of President Jair Bolsonaro are members of Steve Bannon’s network “Reich”. These movements attempt to agglutinate classes, class factions and social strata that are among the “losers” of neoliberal globalization, or are afraid to become such. This is where the elements of the interests of the bourgeoisie and the traditional middle-class, connected with the national state apparatus and the national market, intersect; elements of the wage-class who have been victims of neoliberal globalization and who do not possess the traditional ability of the working class to organize and fight. However, there are also workers who are disenchanted with their own trade union organizations and corrupt political representation. Thus, at the present time, nationalist blocs are being created or recreated throughout the EU and in some other countries, the top of which is aiming to return to the nation states their rapidly losing sovereignty, and thus, outside the control of the bottom of the movements, are connected with the ruling bourgeois class. At the same time, in tough pandemic restrictive and prohibitive measures and requirements for all socio-political movements and parties, especially for representatives of the systemic, but left-wing opposition, covid-status has not and is not an obstacle to meetings of right-wing parties of the EU countries, since spring 2020 – to this day. The police remain indifferent when ultra-right militants violate not only measures of social self-isolation, but also when they initiate violent clashes with their political opponents.

In this context, neo-Nazi groups, or the shadow combat infantry of the described political parties with extensive international networks, pose a particular danger. Groups such as the “Hammerskins”, “Soldiers of Odin”, “Combat 18” and “Blood & Honor” are members of the radical non-systemic ultra-right opposition in Europe. Despite the fact that these groups are officially banned in many countries, in particular in Germany, members of underground extreme right-wing extremist groups have tried, sometimes successfully, to win over members of the military and security forces. From time to time, political scandals erupt, connected with hotbeds of neo-Nazism among the security forces or military units. In the past, in 2020, a neo-Nazi scandal erupted in the German armed forces, and – moreover, among the commanding staff of the elite special force’s unit KSK. This scandal hit the media after an informant reported to the German intelligence agency MAD about the activities of one of the officers with serious combat military training – on the account of this officer several missions to Afghanistan. However, both Interpol and government intelligence agencies, which secretly conducted an investigation of the ultra-right group among the officers of the elite special forces, were in no hurry to label its result as systematic recruitment by neo-Nazis. High-ranking government officials are not interested in the results of investigations carried out, in particular, in Germany by the Military Counterintelligence Service – MAD – to find a wide public response. Investigators only recommended to immediately remove officers associated with neo-Nazi movements from the command of the special forces and ban them … from serving in the Bundeswehr. According to unofficial information, several people from the elite German special forces unit are representatives of a neo-Nazi group, which, as it became known, was planning to commit a number of terrorist attacks. However, having identified the connection of the officers of the KSK special forces unit with the activities of right-wing extremists, the MAD investigators were in no hurry to unravel all the threads of this case, which stretch to the regional branches of the Bundeswehr. In the ranks of the German armed forces, many persons have recently been discovered associated with right-wing radical groups that are officially banned in Germany. The head of MAD, Christoph Gramm, told media representatives that more than 20 representatives of the elite German special forces unit, suspected of having links with right-wing extremists, were recently investigated. In the EU countries, arrests related to ultra-right terrorism have tripled over the past three years: if in 2016 there were 12 arrests of neo-Nazi militants in Europe, then at the beginning of March 2021 there were already 44. Representatives of the network of underground pan-European extremist ultra-right factions are “showing interest” in weapons and explosives that can be acquired through the darknet. Many of the neo-Nazi attacks on representatives of national and sexual minorities, as well as on representatives of progressive political formations, are not registered as terrorism: police officers in various EU countries react extremely sluggishly to such attacks. Those neo-Nazi militants who, due to their extreme aggressive activity and the finding of weapons with them, still have to be arrested, their cases are recorded very vaguely. Only some of the court cases brought against the right-wing radical criminals are carried out under the column “extremist activity”.

Ultra-right extremist organizations and networks are becoming increasingly popular among younger and more educated segments of the population. More information is now also known about the connections and interweaving of an organization such as “Querdenker”, which has regional branches throughout Germany, with far-right groups “Reichsbürger” and “Selbstverwalter”.

The targets for the attack of modern ultra-right extremist militants from different EU countries who have been trained in illegal military camps, as a rule, are refugees from the Middle East, as well as representatives of the Muslim part of the EU so long ago left the camps for displaced persons, having achieved asylum and citizenship from the governments of European countries, but also those groups of migrants who have lived in the EU for a long time, in the second generation. Also, the goal of the repressive liquidation of neo-fascist militants is left-wing political activists.

The military field training of neo-Nazi militants is also carried out on the territory of the Russian Federation, naturally, not without the knowledge of the country’s leadership sympathetic to the conservative ideology of Europe and the United States and the Russian special services protecting its security. Since neo-Nazi activities are strictly prohibited in Germany, German representatives of Combat 18, Blood & Honor, members of the youth wing of the far-right National Democratic Party of Germany (NDPG) and the “Third Way” party go to Russia for military training. where it is held, according to some information, at one of the former military installations near St. Petersburg. Today, two camps of tactical military-sports training are based there – “Reserve” and “Partizan” – in the latter military training is led by instructors representing the right-wing extremist “Russian Imperial Movement” – RIM.

Returning to the legal mass public right-wing populist parties, it is worth noting that in the posts of its groups and communities in FB, which is in the post-Nazi political vanguard of Europe – the party Alternativ für Deutschland writes: “It is quite possible that 2021 could be a year of difficult political decisions – in addition to federal elections, numerous state elections are planned in the regions in the fall. For the first time, the government “marriage” of the CDU and Angela Merkel with the Greens is under threat at the federal level. We want to prevent this scenario – and above all to ensure an even stronger AfD in the Bundestag!”. Founded in 2013, the post-Nazi party already had about 32,000 members, publicly calling on its followers to become “an even larger family advocating for basic political renewal.” They popularize their party by opposing their strategic plans for the renewal of Germany – the inaction of the political “old men”, constantly declaring in leaflets and on the pages of social networks that for the AfD, every new member is incredibly valuable and useful, since everyone is able to “make a serious contribution to that Germany will have a free, constitutional and vital future. ” Here is another quote from the AfD propaganda campaign, clarifying their right-wing populist ideological policy: “But if you do not want to finally join our party, stop by the AfD event in your area and take a picture of yourself!”. Representative of the AfD faction in Lower Saxony, responsible for the activities of the party “for cultural policy”, Thomas Kirste – “now, when there is an attack on freedom of expression, the constant narrowing of the corridor of opinion that comes from various social democratic and left moralists, all people, who always show special tolerance, cultural figures suffer from their political views. The lack of culture extends to all areas of Germany, as well as Saxony: TV stars Katrin Huss and Uwe Steimle, regional bishop Uwe Rentzing and writers Uwe Tellkamp and Jörg Bernig, Xavier Naidu are prime examples. Many of them have lost their jobs because of their political views. Because of their right-wing political views, cultural workers are persecuted by representatives of a tolerant community: they are condemned for participating in AfD events, projects and businesses are boycotted … “

The ultra-right of Germany, having penetrated almost all branches of the regional Bundestag, call on their numerous supporters to rally against the allegedly persecuted for their ideology personalities known in the media and show business who preach national-chauvinist views. According to the authoritative opinion of our fellow Marxists from Frankfurt am Main, the ultra-right, who is supported by an increasing number of people, has an even greater phase of growth of political popularity in Europe ahead.

Before our eyes, there is an intensification of the Nazi “romantics” dreaming of the revival of the world “new Reich” – not only in the countries of the European Union and Europe in general, including Russia and the territory of the former Soviet Union, but also in other countries of the world, including, or – especially – in the United States of America and in the states of Latin America. We consider it a catastrophic mistake today to show widespread skepticism about the threatening large-scale prospects for the Nazification of our Planet. We must not forget that transnational capitalism, defending itself as an absolute ruling system, is entering the phase of its widespread reactionary radicalization; logically transforming into ordinary fascism. We, conscientious Marxists, communists, socialists, today still have every chance to stop this threat to Human, rallying in internationalist unity, overcoming isolationism and atavisms of our internal disagreements.