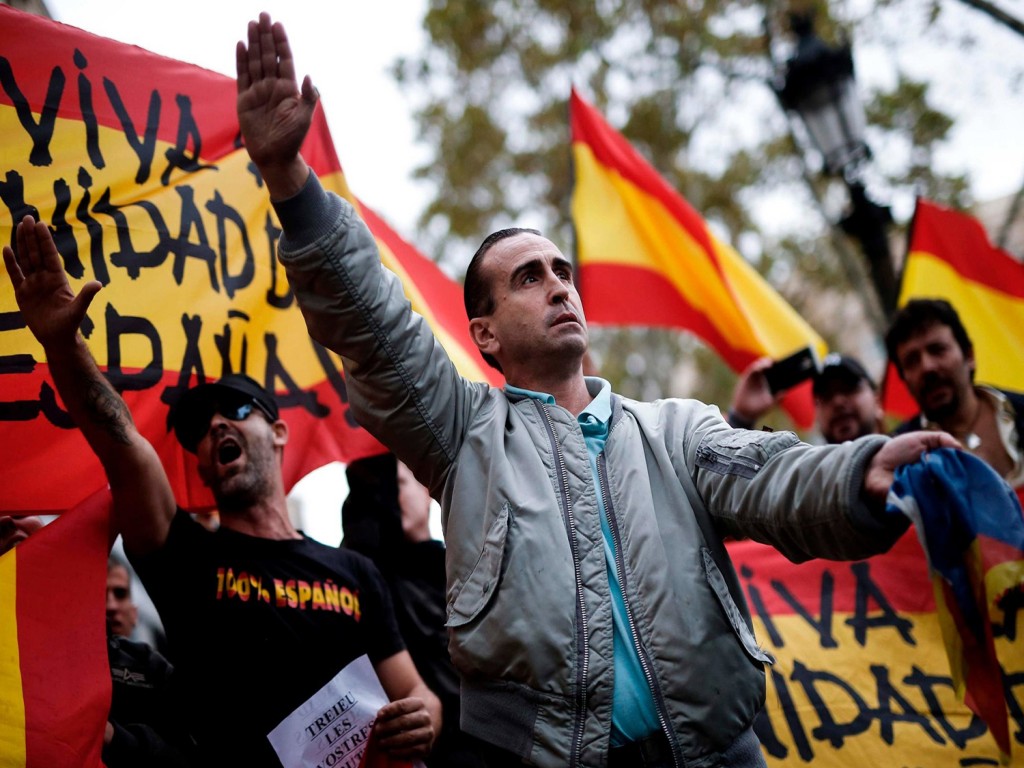 Does fascism exist in a modern Spanish state – in a civilized modern EU country? Are there hate crimes? Are there any murders motivated by racial hatred or political motives? Are we witnessing tragic failures in women’s efforts to win rights? Is Vox Fascist? Vox has a syndicate, is it an oberrist? What’s on the right of Vox? How do we fight the extreme right? What are your international alliances? Are our ultra-rightists like Le Pen, Mitsotakis, Orban, Salvini, Bolsonaro, Piñera, Trump, Putin or Modi? (Comrade Fran Perez, Communications Secretary of the Republican Left Asturias, Spain 2021) 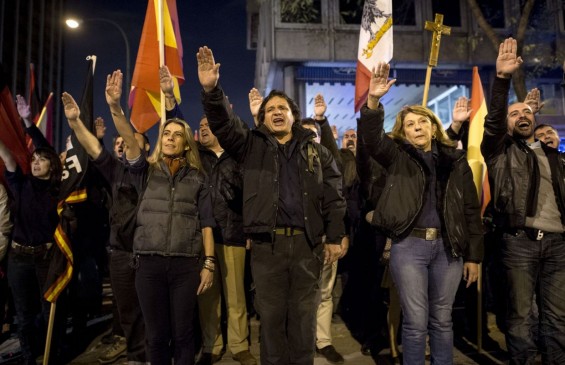 In the skeptical ubiquitous rhetoric of the aging new leftists of the European Union and Russia, one can read a lot from Euroleftist analysts that there can be no talk about any “Fourth Reich” today … appropriate action programs, the answer from skeptical Euroleftists or another columnist Jacobine is simple: “You shouldn’t divert your attention to them, it’s just -“ a short-term freak project supervised in a short period by the ruling class ”. However, it seems to us that the aforementioned tendency of the European left to reduce the problem of active Nazification of the ruling bourgeois classes is nothing more than a fear of reality, connections with which, for the majority of writing left-wing pragmatists, are limited by that comfort zone of the “armchair-laptop-your walls” – a revolutionary, who is scared to even think that the reality of the new international capitalist fascism may one day in the most cruel way – to tear him out of this cozy little world and … put him against the wall of execution. These and other questions of the processes of Reaction and Revenge in the political elites of the EU, we are briefly answered by the constantly in touch fellow Republicans from the “Izquierda Republicana de Asturia”, who today represent the Spanish section of our Internationalist movement South-Eastern Star. Left-wing activists of the republican movement begin their messages with the urgent topic of the rapid vertical progress of the right-wing nationalist party Vox, which at the time of 2021 penetrated into a number of administrative institutional structures, and members of the largest right-wing political organization today, Vox, are actively infiltrating military and law enforcement structures, occupying little the most significant key posts, with access to the levers of control of social processes.

Vox is an unofficial subsidiary organization that emerged as an autonomous entity in 2018 due to the special radicalism of a factional young group from the lodge of the oldest political feudal lords of the European Parliament, the People’s Party. PP, which has shown itself in Spain over the past 10 years as the main tribune of calls for the toughest police measures against any riots of “urban ragamuffins”, as well as for many years introduced into the legislation a draft on restrictions on registration of political Spanish organizations falling under the criteria of “left radicalism” , “Protest strategy” and “revolutionary”. “People’s Party”, apparently feeling its excessive age retrograde; for the reality of the modern “brave new world” released in the context of the militant Reaction – “young political wolves” – Vox, radical fighters against Republicans, leftists and migrants – desperate and determined neo-phalangists who have nothing to lose in the pyramids of the European Parliament and who are not connected by any reporting to the international community at the EuroCouncil … and the immortal Mr. Donald Tusk. However, as is reliably known to young Spanish researchers of modern neo-phalangism, which is gaining strength; already three commercial structures in Spain, whose commercial directors have long-term membership in the People’s Party, finance not only all Vox events and Internet resources, but also provide material support for the development of regional branches of the ultra-right party, and also support the development of Vox political groups within university campuses of Castile, Aragon, Andalusia, Asturias and Valencia. For its part, the highest factional international leadership of the “People’s Party”, working in the European Parliamentary Commissions of Brussels, contributes to legal immunity to ensure the most unimpeded activity of the right-wing radicals from Vox in Spain.

This is how one of the leftist activists and writers from Andalusia, Comrade Dolores Res, describes the rise of Vox: “… many other questions have been knocking on our heads since Vox burst onto the institutional political scene back in 2018 by entering the Andalusian parliament. This push was not an isolated incident. Some of his remarks (meaning the leader of Vox, the famous right-wing populist and blogger, Caudillo Santiago Abascal, who has a high citation rating among Spanish young neo-phalangists, the grandson and son of wealthy Francoist functionaries) are what got us thinking about the phenomenon that is here to stay: from a discursive normalization fueled by hate and fueled by very high presence and media projection, to a censure movement promoted by Vox in October 2020, after encouraging demonstrations denying climate change or COVID-19”. 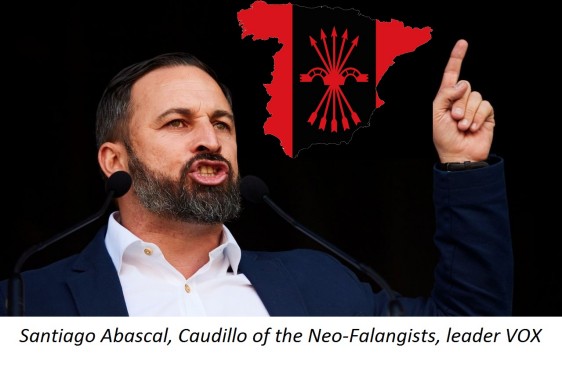 Much has been written since December 2018, when we (modern citizens of Spain) over the past three years began to resemble, unfortunately, a little more like the rest of Europe sinking more and more in Nazi revanchism: Vox was always at the forefront of those extreme right parties with institutional representation , who for the first time, without cover and complexes, put on the table the political ideology, language and aggressiveness of what is known as sociological Francoism.

This post of ours for the friendly web resource Resistentiam is the first step in an attempt to provide the general reader with not only clues to the analysis, but also a detailed description of the entire cosmos of the extreme right in the Spanish state, from its institutional expressions with Vox, led by the new Caudillo Abascal, to its tentacles in big football, social media, influencers and thought-generating spaces such as nongovernmental foundations or the right-wing populist lobby in Spanish top-rated media.

Mapping the Spanish far-right of modern times inevitably leaves us wondering what is happening in the rest of Europe and the world. We see the consolidation of the “reactionary international”: an abstract entity, and perhaps not so much, with international connections not only of Vox, but of the entire ultrauniverse. Their foundations and similarities are varied, but what stands out is racism and misogyny ideology that attempts to rekindle consensus in a reactionary, violent and instrumental way about women’s rights. In short, it is the start of a reactionary Alliance that is clearly anti-communist, Islamophobic, ultra-conservative and racist; their generator of hatred and bile that tries to permeate our collective ideology and our subjectivity based on solidarity, equality, multinationality and diversity. We are faced with the far-right who intend, with some success, to impose their own framework for debate and set a public agenda.

When we analyze the arrival of monsters at a time when, as Antonio Gramsci said, the old does not die, and the new is not yet born, we see a certain fascination with the strategy of the extreme right on the part of certain sectors, including, fortunately, a part of the left that is still in the minority. The left, located in a reactive position, looks at the fantasy and illusion of the communication strategy of the far-right, their use of social media, or their perceived ability to penetrate very heterogeneous segments of society. The red and white language, although a minority among the left in the Spanish state, is still a danger trying to break through.

We cannot allow, even sluggishly, to be accepted by the extreme right on immigration and labor issues (in the purported defense of the rights of the indigenous working class), or on rights issues for electoral, tactical or strategic reasons. Because in the so-called “LePenisation of Spirits,” the extreme right fulfills its function, which is not so much to rule as to supplant debate to such an extent that the left accepts the postulates of the extreme right, especially the racist. Therefore, our work as a transformative left can only be a search and defense of progressive political alternatives based on feminist and internationalist commitment, and with democratic socialism as the horizon. And, of course, we should never regret being adaptive.

Our republican associate Mikel Ramos makes an extensive overview of the ideology and political agenda of Vox in order to understand and optimally classify the political formation. In addition, this work also contains several collaborations of people who closely study these movements: Nora Rodriguez, Jordi Borras, Roman Cuesta, Julian Macias, Pep Anton Ginesta, Adrian Juste and Juan Francisco Albert Guerrero de Al Descuberto, Proyecto UNA, Nuria Alabao and Carles Vinyas. With these contributions, the subject of research goes further: religious fundamentalism, classic far-right, nostalgic neo-Francoists, neo-Nazi groups, lobbies, fake news, far-right media, etc. That is, the entire network of the far-right universe that has always been here, never did not leave and which, by no means from disappearance, seems to be gaining strength like that abyss, that dark place that we never wanted to look at and which now puts us in front of a mirror in which it is difficult for us to recognize ourselves as a society.

Our colleague and comrade Mikel Ramos manages not only to map and draw the extreme right in the Spanish state, but also to expose it with rigor and a great level of detail. This research was born with a vocation to last over time. In addition to the indirect analyzes that are inevitably a subject of study as the strategies of the far-right are at their maximum in the years of COVID-19, this report attempts to systematize all the knowledge, monitoring and active social activities that have been carried out by committed activists and journalists over the years. That is why we want this to be the starting point and the beginning of an up-to-date draft of the reference manual on fascism of modern politics, a high-circulation print version of which we are preparing by 2022 together with the internationalist web portal Resistentiam and colleagues from the Russian and Irish sections of the International Combat Social Action SOUTH – EASTERN STAR.