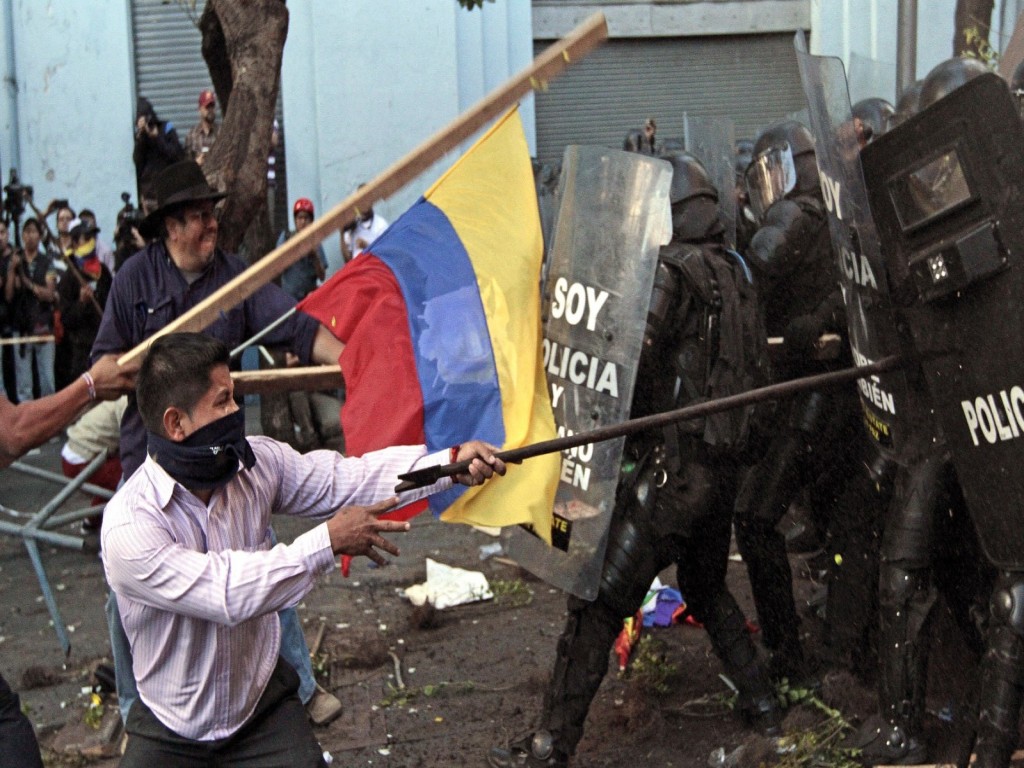 PEOPLE OF ECUADOR AGAINST GUILERMO LASSO

In the current September days, a growing nationwide mobilization against the capitalist regime operating in the country is taking place in Ecuador. Social activists, the working class and indigenous ethnic groups in Ecuador have staged the first series of national strikes against the anti-popular policies of Guillermo Lasso’s right-wing administration. A popular protest movement is paralyzing and blocking routes due to violations by the Lasso government. The demonstrators are demanding that the country end the repressive neoliberal policy that finally deprives Ecuador of its economic sovereignty. 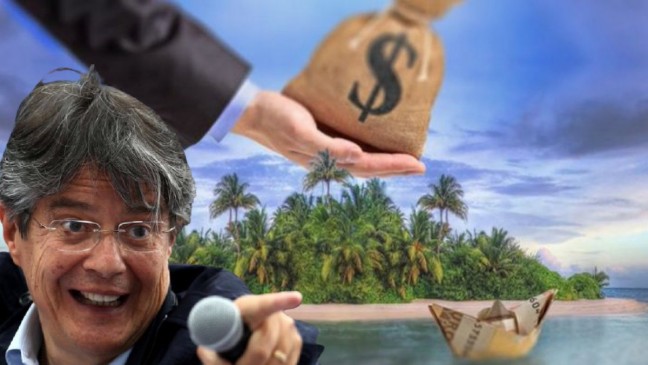 The richest banker in a poor country, the owner of Banco de Guayaquil, Guillermo Lasso, faced the first national protest as President of Ecuador. The call, with its epicenter in Quito, brought together representatives of labor unions and indigenous movements back in late August. In the first week of September 2021, student unions and workers in the large agricultural sector who have joined the working class and indigenous peoples of Ecuador also announced their intention to take part in a nationwide protest. In addition, by mid-September, popular protests of many thousands had engulfed the country’s largest cities, blocking their key highways. Protesters closed several roads along the coast on Wednesday September 15, 2021, in protest against the economic policies of the Lasso government. The Jujan-Babajoyo road, which connects the provinces of Guayas and Los Rios, was closed by peasants who demanded support for the sector and contain the skyrocketing prices for agricultural inputs and fuel.

The same thing happened on the Daule road ring, where agricultural workers demanded that the government’s obligation to set a minimum price for rice be respected. Meanwhile, in Santa Lucia, police fired tear gas on demonstrators blocking the road.

On the Patricia Pilar-Santo Domingo de los Tsachilas road, which connects the Sierra to the coast, there was an extensive line of all kinds of vehicles that were forced to get stuck due to popular protest.

Indigenous groups, workers and other leftist social movements have banded together to march through the streets of major cities. As a result of the massive protest mobilization of Ecuadorians, the leadership of the Guayaquil land terminal announced that the work of 17 provincial passenger transport cooperatives was paralyzed. The epicenter of the march, organized by the United Front of Workers (FUT), was the capital of Ecuador. The Protest March in Quito began at 4:00 pm local time, from Caja del Seguro to the historic center.

Two days earlier, on Monday 13 September, students and workers in Ecuador announced that they would mobilize in the coming days against President Guillermo Lasso to voice their opposition to neoliberal policies, including possible cuts in education grants. The Federation of University Students of Ecuador announced on Twitter that next Thursday will be a day of protest, with students gathering to demonstrate to demand respect for the university budget, as well as for the democratic Organic Higher Education Act (LOES) that has existed since the reign of President Rafael Correa. The students intend to put forward a political and economic demand that the Lasso government “end neoliberal politics.” The student group presented a proposal that seeks to protect the existing targeted budgetary funds for scholarships, as well as the autonomy of the university, which the government of Ecuador has launched an offensive. The indignation of the student masses of the country is caused not only by concrete steps, but also by the very fact that education in the country is beginning to turn into a business. “The underlying problem of Ecuadorian higher education is growing. This is a confrontation between two opposing models: on the one hand, neoliberalism advancing in all positions, which focuses the problems of the educational sector on the bureaucracy of the governing bodies of the higher education system and on the lack of political control over state universities”, the student union said. FEUE also requires free university admission and a true, not populist, democracy. FEUE also requires free admission to university and a true, not populist-declared democracy.

Ecuadorian Workers’ Trade Union – FUT held the 14th Congress of the United Workers’ Front, announced the Great National Mobilization and set it to start on September 15th. Lasso: Both the General Union of Workers’ Union – UGTE, and the National Union of Educators – UNE, which made an appeal to the Ecuadorians, announced their decision to take part in the protest mobilization, will come out to a joint protest against the anti-democratic steps of the Lasso government. They also demanded more coronavirus vaccines, better education and participation in discussions on possible reforms in the world of work.

First of all, Ecuadorians demand a freeze in fuel prices: they have grown by 18% in recent months, due to the system of economic innovations introduced by the leadership of Lenin Moreno and supported by G. Lasso. The trade union leaders expressed the general concern of the Ecuadorian people that after the victory in the presidential elections Guillermo Lasso, unexpectedly overtaking the socialist presidential candidate Arena, in the new government there is a tendency towards continuity with the government of ex-President L. Moreno, who signed a number of agreements with the IMF on the terms dictated by the officials of the Monetary Fund. Angel Sánchez President of FUT has pledged that the mobilization will be the beginning of a series of demonstrations against the measures of the Guillermo Lasso regime and the Constitutional Court. 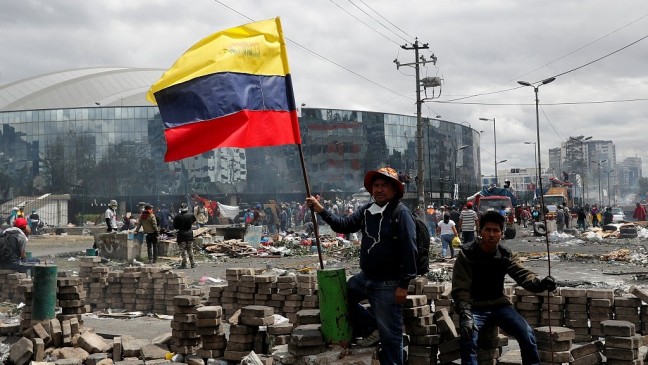 The reform of the “Organic Law on Intercultural Education” announced by the government officials of G. Lasso also provoked outrage among teachers and students, as well as workers and agrarians, whose children are unlikely to be able to freely get higher education. To draw the attention of the Ecuadorian and Latin American publics to the fact that the forthcoming law is not constitutional, on September 12, 80 teachers went on a 23-day hunger strike.

Also prior to FUT’s announcement of the Great National Mobilization, protests by the alliance of rice growers and agricultural production sectors began in the city of Huquillas, which lasted more than two weeks. The Confederation of Indigenous Peoples of Ecuador (Conaie), which supported the protests of agrarians, issued a statement warning that “Lasso has decided to transit and defend the policies of his neoliberal predecessor Lenin Moreno, pursuing economic policy in the country under the supervision of the IMF.” It should be noted that earlier, before L. Moreno came to power, the indigenous peoples took a position of opposing the steps of the progressive government of “civil socialism”, which relies on education and science.

President G. Lasso, in response to a statement by the leaders of Conaie, an organization with significant influence in multinational Ecuador, said that he would not succumb to “the imposition of his will on the part of certain social groups and segments of the population,” as he said, can have a negative impact on the poorest groups of the population. At the same time, despite the categorical nature of his statement, the President of Ecuador promised to start a dialogue. Conaie President Leonidas Iza had been hoping for a while that Conaie would receive a written invitation to the meeting. However, at the moment, no official invitation to dialogue has been received by the sectors mobilized before September 15 to dialogue with the current government. Guillermo Lasso stepped into the media stating that his government was in favor of opening channels of dialogue to deactivate protests ahead of the 200th anniversary of Central America’s first independence. The President continued to assure that he was ready to receive the leaders of the Union of Indigenous Peoples – Conaie, at the Carondelet Palace, while not taking any steps on his part to start a dialogue with Conaie G. Lasso mentioned his openness to dialogue and on September 14, in preparation for the ceremony celebration held in Parkayaku, north of Quito: “We will always promote dialogue with everyone.” However, later in the president’s statements, less promising notes sound: “… but this dialogue should be purposeful, and should not be imposing on anyone’s side. We will never give in to threats, because it will destroy all our good work to ensure stability in Ecuador,”- these are the words from the President’s statement. After that, the president of the largest confederation of indigenous peoples in Latin America, which for a long time distanced itself from the policy of official Quito, said at a press conference: “Lasso has decided to move forward, support and defend Moreno’s policy” under the conditions imposed by the IMF to provide bonded loans to the country”. Recall that back in October 2019, Conaie led a mass movement of protest against the decree of the government of L. Moreno, by which the latter canceled subsidies for fuel prices, which had been in effect for decades for indigenous peoples in the agricultural sector. In the midst of the pandemic, the former President of Ecuador instituted a fluctuating fuel pricing system, which has led to constant increases in the prices of gasoline and various basic necessities. Leonidas Isa said at a press conference that “the indigenous peoples of the people cannot afford to support the uprising, but …, – added the leader of Conaie, – “he also does not want the crisis to hit the indigenous population. ” The indigenous leader questioned Lasso for warning that he would not tolerate possible indigenous protests and recommended that he “turn to statistics but not persecute social strata” and that he would determine if he was going to “follow Moreno’s path “Or really listen to the Ecuadorian people”. 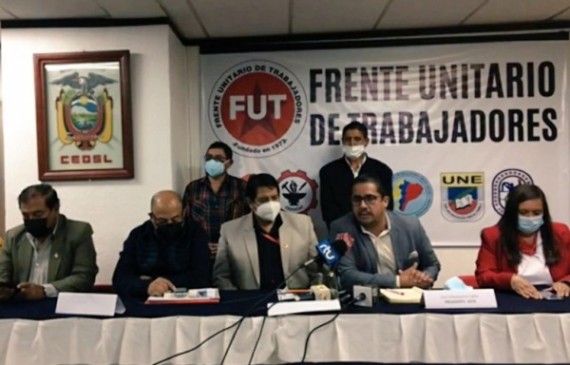 Comrade Angel Sánchez, head of the General Union of Workers of Ecuador – FUT, explained in the media that the reason for the massive mobilization was the fact that the Lasso government did not respond to a request from the National Union of Educators (UNE) about the advisability of reforming the “Organic Law on Intercultural Education ”, which was aimed at guaranteeing wide access to education in a country with great ethnic diversity.

The General Union of Ecuadorian Workers expressed their support for a group of teachers who chained themselves to the fence of the Constitutional Court of Quito, as well as 80 teachers who, in protest against the government ignoring their concerns about the fate of the educational system, announced the beginning of their hunger strike on September 12.

FUT also criticized the so-called “humanitarian law” introduced during the coronavirus pandemic by the government of ex-President Lenin Moreno, which Guillermo Lasso does not intend to revise. Recall that Areno, who lost to him, in his election program indicated his desire to revise the unpopular and contrary to the Constitution of the country steps of the previous government. This law supports a unilateral “agreement” between employer and workers, which leaves the latter helpless in the event of seeking new sources of income during forced self-isolation. The working class of Ecuador, voiced by FUT, is justifiably outraged that the Lasso government is actually on the side of employers in its policies, who, citing the pandemic, have resorted to laying off hundreds of thousands of workers to save their businesses. The list of demands drawn up by the leadership of the General Union of Workers of Ecuador includes a protest against the “privatization of strategic territories”.

The Heavy Transport Union, led by Alex Bustillos, said in a statement that the workers are going to stand up for their right to resist. The union chairman said the leaders of the heavy transport sectors generally agree with the workers, as they do not have the resources to keep transport running smoothly as a result of rising diesel prices. From 6 am on Wednesday, September 15, the work of freight transport was stopped. 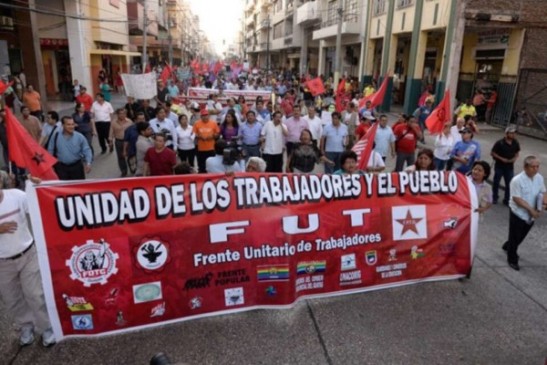 The political organization Partido Comunista Marxista-Leninista del Ecuador, whose members take the most active part in protest demonstrations, and with the help of our fellow correspondents who get in touch with the editorial staff of “Resistentiam”, will continue to provide the latest and most objective information from the place, trying keep our internationalist communist community informed of the true picture of what is happening in Ecuador.