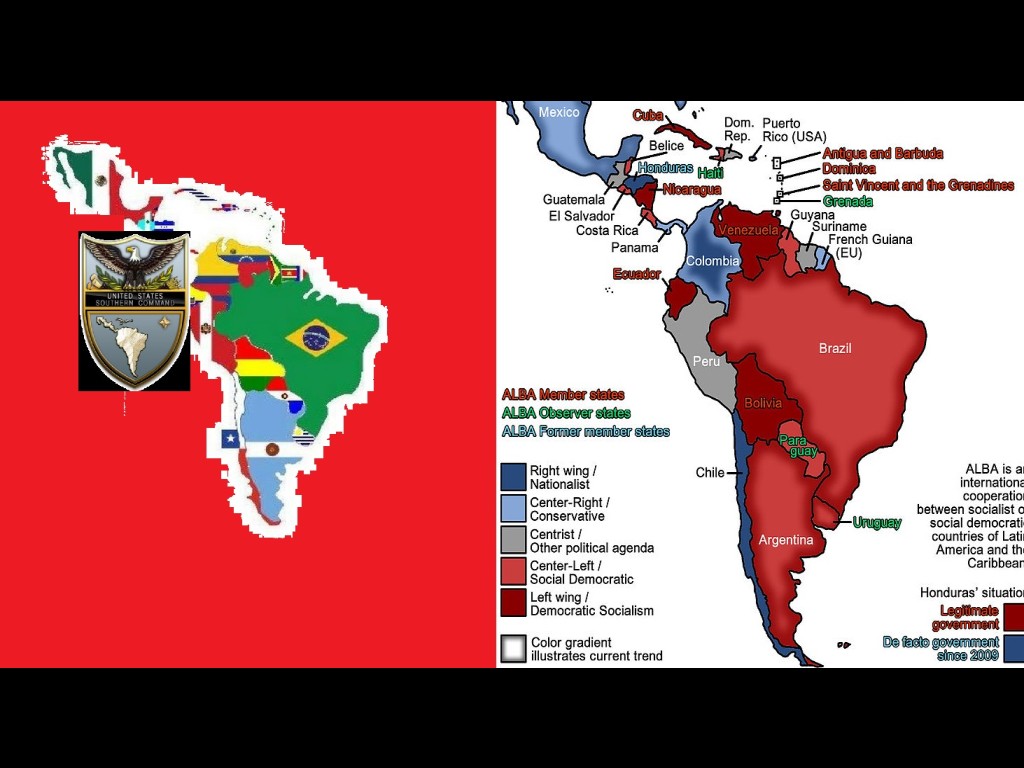 Earlier, in the first days of February, this year 2021, our comrades in the Internationalist Movement from Honduras and Nicaragua reported alarming fragmentary information … In particular, Comrade Joaquin Naguerra from the “Partido Revolucionario Hondureño” sources, – the mass transfer of an additional expanded military human contingent (according to the first approximate data, in the amount of about 5,700 people) and several dozen units of military equipment, which is part of the structure of the armed forces of the US Southern Command, to the southern regions of the country bordering on Nicaragua, near the Honduran geographical points located along the line of 6200 kilometers of the total length of the common border with Sandinista Nicaragua – during the first decade of February, after the announcement in the White House by President Biden of the conceptual provisions for the intensification of US foreign policy on 02/01/21, the replenishment of military human and technical USSOUTHCOM …

Without any official announcements, such as “Interstate Military Consolidation Agreements”, broadcast on central TV or published by the official pro-government media in Honduras; The border areas of Honduras, its northern highland region El Paraiso and extended zones of undeclared mobilization of the US Southern Command – with the Nicaraguan state of Nueva Segovia, part of whose cities are El Trapiche, La Paz, Jalapa, is literally occupied by the center of the Nicaraguan pro-Washington opposition coalition, the Democratic Alternative Alliance. Our comrade sources have previously reported that the Sandinista leadership of the country, headed by D. Ortega’s team, for a number of objective reasons does not exert any repressive military-political pressure on the Democratic Alternative Alliance, by default providing the coalition in conditions isolated from the epicenter of large Nicaraguan cities , thereby, as it were, providing the anti-government Alliance with a conditionally illegal temporary informal micro-geopolitical autonomy, since the latter in their tactics and strategies have the basic principles of political strategists from the OAS – to provoke the current legally elected left-wing president to orders to forcefully eliminate the centers of anti-government opposition forces of many thousands, for which theoretically should be followed by the actions that Washington expects: the announcement of the current leadership of Nicaragua to criminals against international human rights, using, inter alia, terrorist methods in achieving their politically x goals”, which is in accordance with international law in the new edition of the UN General Assembly.

By the 20th of February 2021, the topic of the current massive deployment of the US military contingent in the border territories with the countries of the anti-capitalist “left turn” – Venezuela (in the east of Colombia) and Nicaragua (in the north of Honduras). Our comrades from the field intelligence press service of the Venezuelan Movimiento Revolucionario Tupamaro, in turn, saw fit to share the “hot and alarming” information they knew from trusted sources in the OAS and their own sources in Honduras and Colombia. US Southern Command held a training conference at its Headquarters in Honduras from 2/23/21 to 2/27/21 prior to the deployment of the new expanded Operation Alamo Shield to prepare 1st Security Assistance Brigade personnel for future missions in Colombia. Which is threatened by internal and external terrorist threats, supported by the Venezuelan leadership in the person of President N. Maduro, in Honduras and Panama, as well as the opposition Sandinista leadership “democratic enclave” located in the north of Nicaragua.

US President J. Biden decided to start a new occupation of Latin America, already at the first stage of this operation launching “heavy artillery” in the form of the 1st SFAB – an elite US Army unit specially trained to provide advice and assistance to partner countries. As their charter says: “SFAB’s presences in Colombia, Honduras and Panama discourage threats together with partner countries to protect our way of life.”

The first deployments of SFAB are intended to support the intensified operations of the US Southern Command to combat drug trafficking and radical left-wing terrorism, both at the grassroots and at the highest government levels of some Latin American countries designated by the US Southern Command Headquarters. Major General Daniel R. Walrath, commander of the southern US Army, spoke in the Honduran capital of Tegucigalpa, stating that this is the first of many, many pre-deployment training conferences in support of the first rounds of SFAB deployments in the context of a large-scale operation in LA Alamo Shield. calculated for 2021-2022.

The idea is to share information to minimize the gaps associated with alternating deployments and to maintain momentum by reaching a common understanding among all stakeholders in this mission. The conference was the result of recommendations from SFAB executives returning from the first iteration of the SFAB deployment in Colombia.

During the three-day conference, participants attended Country Review Briefings, Support Briefings, and Legal Briefings to gain more information on missions prior to their deployment in each Burning Continent country.

We also consider it necessary to quote the well-known quote from the speech of Major General Daniel Walrath in Tegucigalpa on 24.02.21: “The idea also arose from my own experience in Iraq and Afghanistan. Before each deployment, all mission stakeholders came together to discuss how mission sets have evolved over time, which better prepared us for deployment.”

In the 21st century, having traversed the path that made us live and survive in the conditions of dictatorship and the politics of hunger and suffering, in order to reach our days, the task before us forces us to overcome the barriers of sectarianism, dogmatism and opportunism in order to create powerful forces that resist imperial claims …

“Neoliberal Globalization 2021” will try to suppress the sovereignty and self-determination of peoples, an imperial technological revolution, create new bonds of dependence and transculturalism, military interventionism, feedback from its technological / military industry and the appropriation of natural resources. Their financial policy drowns the states with usurious loans.

We, the revolutionary anti-capitalist internationalist movements, have moved forward again, and we are already ready for the combat-ready defense of social sovereign freedoms; Cuba, Nicaragua, Mexico and Venezuela resisted, Bolivia embarked on the path of social reanimation and recovery, saving the people’s government from the clutches of a coup d’état; In Peru and Ecuador, national rebel forces are maturing for unity, with the potential to triumph a project of popular unity that will change government under pressure, to defend sovereignty and uphold social justice.