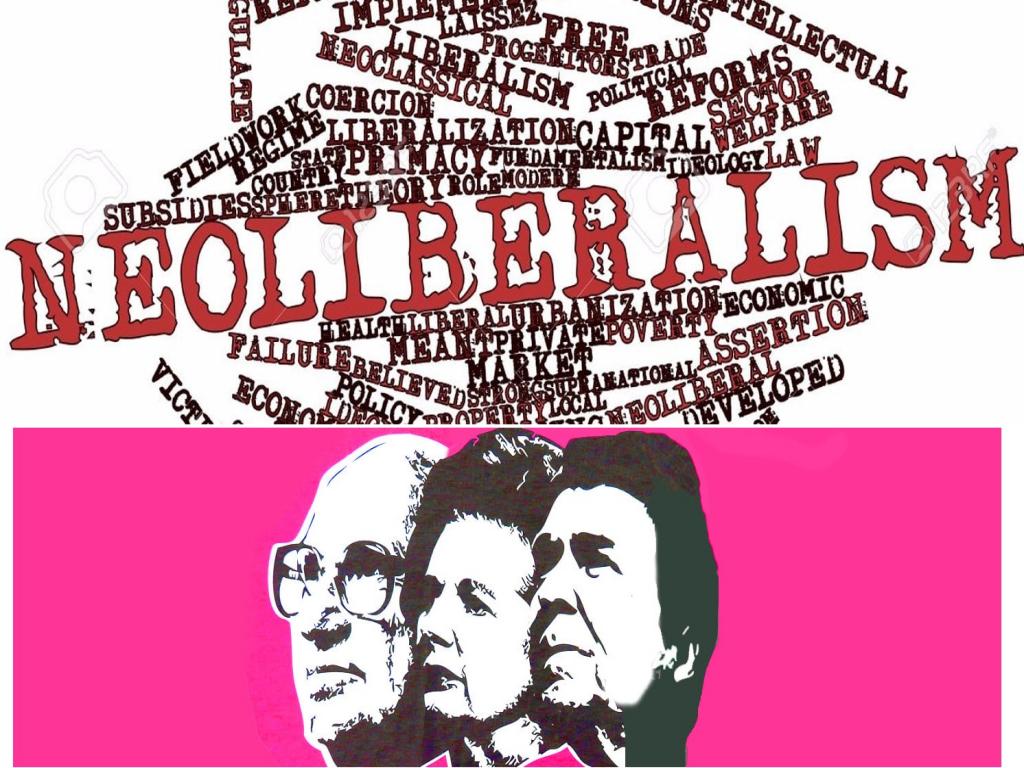 NEOLIBERALISM AS IT IS: DESCRIPTION FOR TODAY’S TEENAGERS

Following the concept of “liberalism,” which was irrevocably transformed from the beginning of the 2000s, today the stamp: “neoliberals,” “neoliberal,” is used everywhere, – according to the addressee, and, more often, it is distorted, inappropriate. Especially – in the rhetoric of the most massive frantic, shouting and vociferous segment of the Runet – the social-patriotic “digital street crowds”. As befits this environment, which is the most distant from science, quick for judgments and verdicts, legislating in the popular mind, there is an unconscious but very effective inversion of concepts.

Repeatedly we have to deal with the not always correct use of this definition even in the most precious environment, in our change – among the thinking progressive youth from 16 to 20 years old. We present a very rough experimental sketch for a future possible paragraph for the correct textbooks of the underground schools of parallel secondary education …

In 1754, twenty-two years before Adam Smith published A Study on the Nature and Causes of the Wealth of Nations. The Dijon Academy raised a bold question and offered a reward to anyone who dared to answer it: What is the origin of inequality between men? Is this a consequence of natural law?

The philosopher Jean – Jacques Rousseau was interested in this topic and in response wrote a philosophical essay on the origin of inequality among men. In it, Rousseau argues that social and political inequality is not natural, that it does not come from divine will, and that it is not a consequence of natural inequality between people. On the contrary, its origin is the result of private property and abuse on the part of those who appropriate the world’s wealth and private benefits arising from this appropriation; Already at that time, the search for answers to social inequality was a central theme of the social sciences.

Neoliberalism, a radical version of economic liberalism, limits human greatness to the ability to generate monetary income, exacerbates individualism and the race for victory and possession, and therefore greatly exacerbates inequality. It releases greed, corruption and violence and, as it spreads to social groups, socially destroys the community. Thus, an order of values ​​and virtues is imposed, in which individual freedom is understood only as the freedom to produce and consume.

This structural paradigm obeys a model of global injustice, with the result that a small portion of the population gains power and control over the social and economic (un) stability of the rest of the world.

One of the main reasons that led to such inequality in the context of globalization is, to use the terminology of some political scientists, corporatocracy, that is, the invisible government of corporations, consisting of the political, business and financial elite.

This corporate system is made up of investors, financiers and owners of multinational companies. Of course, inequality is not only manifested in the economic sphere, but the economic power of these companies also endows immense political, legal and social power.

The Oxfam Foundation, in its report “An Economy for 99% of the Population” (2017), notes: “Only eight people (actually eight men) have the same wealth as the poorest half of the world’s population, 3.6 billion; which shows that the gap between rich and poor is much wider than previously thought. Big companies and the richest people manage to evade taxes and evade taxes, promote wage devaluations and use their power to influence public policy, thereby fueling a serious crisis of inequality.

The report also calls for a fundamental change in the economic model in a way that benefits all people, not just a select elite.

These large companies and financial powers are a very powerful lobby that influences decisions made by the central government and determines global policy pursued by the World Bank (WB), the International Monetary Fund (IMF) and the World Trade Organization (WTO).

According to the same previous report, 31 companies from various sectors such as financial, mining, textiles or pharmaceuticals, among others, are using their enormous capabilities to ensure that both legislation and national and international policy development are focused on their protection measures. their interests and increased profitability (…) Client capitalism benefits capital owners and those who run these large corporations, at the expense of the common good and poverty reduction.

The goal of neoliberal politics is to ensure that the state stops meddling in the economy so that citizens lose their freedom and eventually become economic slaves to the market. In the words of Friedrich von Hayek, one of the intellectual leaders of neoliberalism:
“The system works only if a person is willing to adapt to changes and processes, to obey conventions that will not be the result of rational planning. A person must be ready to submit to the consequences of processes that no one planned and which, perhaps, no one understands”.

Neoliberal politics seeks to increase the benefits of high incomes through various measures, neoliberal theoretical metaphysics is used to convince us that these measures benefit all of us, despite the fact that reality indicates otherwise. And if they don’t work, they tell us that it’s because they weren’t applied with the required intensity.

1. Reduce taxes on high incomes and privatize social services: This unpopular measure will always be marketed as a way to improve efficiency, so as a rule, prior to privatizing the civil service, previous mismanagement will be forced to justify it. … In addition, it will be sold as a tax cut for everyone, so that the layman thinks that he is winning, when in fact, the opposite is true: by reducing taxes, it is necessary to privatize social services, and these privatized social services will raise their prices. Finally, social services will become much more expensive for the user than they previously had to pay in taxes for their maintenance. Of course, this increase will not affect high incomes as much as these prices can afford.

2. Deteriorate workers’ working conditions and keep unemployment high: this is what they euphemistically call “productivity gains for competitiveness.” To maintain the privileged position enjoyed by the elite, it is necessary that the worker cannot take advantage of the shorter working hours that technological advances permit. If you have too much free time, you may be able to think for yourself. For this reason, as soon as their economic policies achieve the first and obviously bad economic results, they begin to announce in their media about the famous structural changes. Its structural adjustment program boils down to packages of measures that include lower wages, increased working hours, free layoffs, etc. These programs are possible when the unemployment rate is high, which serves as a compulsion for workers, so the state has a policy aimed at maintaining the unemployment rate above 5%, what they call the “natural unemployment rate”. Labor reforms advocated by neoliberals increase job insecurity and unemployment, but are beneficial for other reasons: they increase business profits and weaken the strength of the union movement and other protest movements. They increase corporate profits and reduce the strength of the trade union movement and other protest movements.

3. Transfer production (transfer it to a third world country) and deindustrialize the first world: various methods are used to maintain a high level of unemployment, the main one of which is to legally facilitate the transfer of production to countries with cheaper labor (“Shuffle”). These (third world) countries were previously placed in a situation of dependence due to economic reporting plans developed by the IMF and the World Bank. Thanks to the planned crisis in these countries, a massive arrival of cheap labor is also achieved, ready to more easily accept the conditions of structural adjustment (legal or illegal emigration, in both cases it is considered useful). In addition, the deindustrialization of the first countries of the world makes them more dependent on foreign trade, reducing the real control of governments over the economy, instead, increases the power of transnational corporations in the hands of the oligarchy.

4. Promote the creation of speculative “bubbles”: neoliberal policies that promote unemployment, lower wages, etc. Reduce the purchasing power of the lower and middle class. The increased income of the upper class cannot compensate for this. Consequently, demand (what consumers buy) decreases, this affects the economy, which slows down its growth. To solve this problem, uncontrolled credit expansion is encouraged. Thus, demand is artificially restored through consumer loans. In Chile, more than 20 million credit cards were circulated in the market in 2011, leading to an economic growth in the inflation “bubble”.

5. Encourage State Debt to Reduce Taxes (First Third World Countries, Then All Others): With the new financial system following deregulation by Richard Nixon (1971), country debt was promoted as a way to enrich investors. The idea is that the rich lend the unpaid money to the government in taxes. This is not only done on a national scale; many corrupt governments have also been bought in the form of loans (through the IMF and World Bank) at variable interest rates. In this way, eternal payment was guaranteed and they were subject to these savings. When the situation became desperate, the IMF and the World Bank made the needed aid contingent on neoliberal policies that brought new benefits while social peace in these countries was destroyed.

Oliver Lorillou and Eric Toussaint masterfully explain foreign debt fraud. In the 60s and 70s of the twentieth century, loans were provided to third world countries at low interest rates. Loans were requested with a view to reducing income, since the value of the products of these countries (raw materials) only depreciates. Also, in the 1980s, Reagan decided to unilaterally increase the interest on the debt. The combination of these two elements (depreciated cost of production + increased interest) makes repayment impossible, so local leaders have to renegotiate new loans with the IMF and World Bank to pay interest on old loans
All of the above reflects the psycho-political and economic system, which, falsely dressed as a defender of freedom, cannot blur its true essence …

“There is Individualism, Ownership, Order and Consumption; and society,” as Margaret Thatcher once said, “does not exist.”