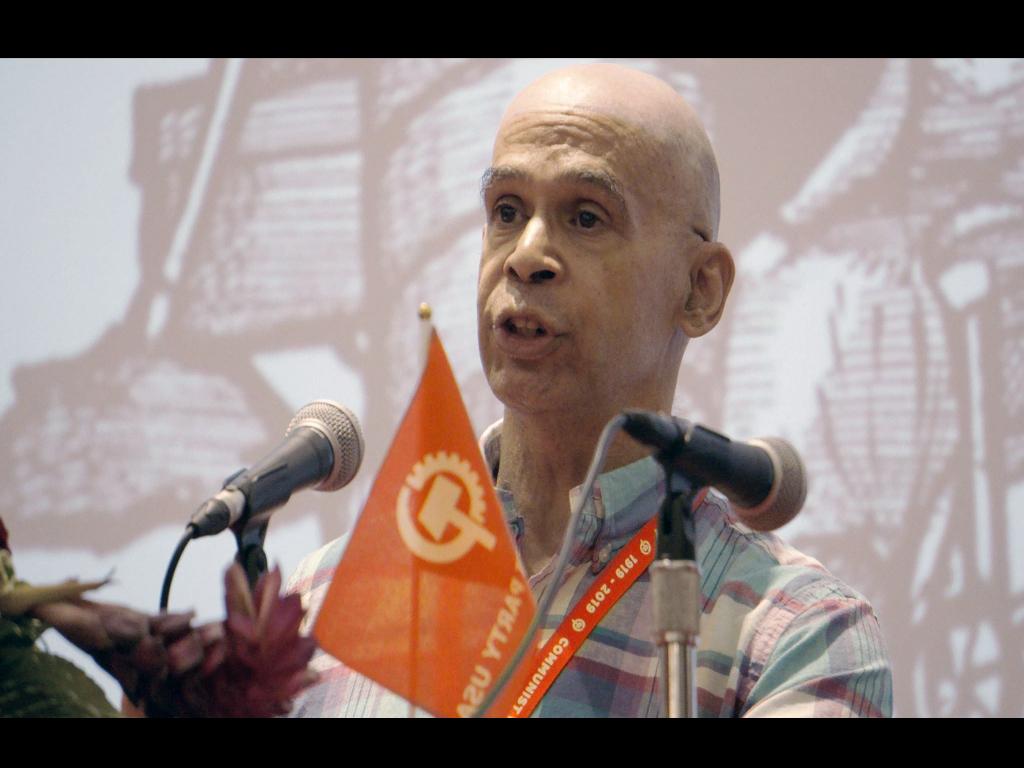 JOE SIMS: “Young people are being radicalized, are coming to Marxism, in very specific circumstances and conditions…”

Dialogue with our associate, co-chair of the US Communist Party comrade Joe Sims

– Dear comrade Joe Sims, first of all I would like to congratulate you personally and your political partners on the past epoch-making date – the 100th anniversary of the US Communist Party! Two years after the victory in Russia in the Great October Revolution, in 1919, a full-fledged and active political organization appeared in the USA based on Marxist-Leninist ideas … From the point of view of us internationalists, today the US Communist Party remains as before true to herself, her condition is currently excellent. For communists around the world, the fact that for over 100 years a fairly large Marxist-Leninist political structure has existed and has been functioning in one of the most reactionary countries is a phenomenon in many respects. Comrade Sims, the first question is timed to coincide with the 100th anniversary of the United States Communist Party: thanks to which, despite the repressive measures that have arisen over the years from the ruling class of the United States against the Communist Party, are you still active, not transformed and not split?

– Thank you for your question. How did we survive? Well the  existence of the Communist Party is not accidental or fortuitous.  It is a conscious act of advanced forces, the conditions of which are constantly being reproduced by the very nature of the capitalist system itself.  In this sense, a communist party can never be destroyed, because the conditions that bring it into being are birthed with the passing of each day.  Radicalization is an objective process.

That said, working-class knowledge and practice is not automatic, but gained over years, decades even, of class and democratic struggle.   The CPUSA has had its up and downs,  and more than our share of difficulties in adjusting to the realities of carrying on a struggle in the United States.  Our perserience we think is due to deep roots in the working class in the first place and our ability to produce communist leaders and theoreticians from its ranks. This has given the party a certain stability in the most difficult of times when we were outlawed and jailed.
However the party is not today what it was when it was created in 1919 and we have suffered dissolution first after World War 2 and splits, particularly after the collapse of the Soviet Union. 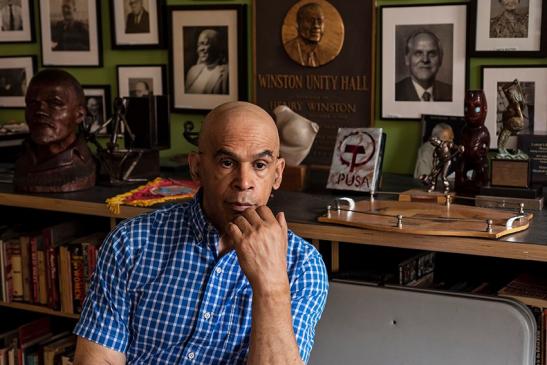 – What determines the current feature of the tactical and strategic programs of CP USA?

– We feel strongly that each communist party must develop a path to socialism based on the unique circumstances of each country.  The United States is an advanced state-monopoly capitalist country, a still evolving multinational state, with a two party bourgeois democratic system of government.   The U.S. has a huge civil society,  a huge working class whose composition has changed dramatically over the last 50 years both with respect to gender, racial and social composition.  There is a long-standing crisis of governance and economy with the faltering of the neoliberal model and the search for a replacement.  A fascist danger looms along with the threat of war.

We feel that breaking the grip of extreme right on the handle of government is a condition for social progress.  The CPUSA works to create an all-peoples front (popular front) to realize this objective. We favor an anti-monopoly strategy and support the goal of an anti-monopoly government as a step along the way to social revolution.

– Is it possible for you, as one of the leaders of the party, to formulate in 5 theses its main victories and, especially, those that have already been consolidated today as the achievements of American society, but which have been won over the 100 years of the existence of the US Communist Party?

– I am not sure about the number 5 regarding quantifying victories over the last 100 years but we would begin with the creation of the communist party itself. It is a huge, world-historic development – the self-knowledge and action of the working class that it and its political party must lead the struggle for a new society. Secondly, the growth of industrial unionism and collective bargaining is another major victory: the self-organization of the class around economic struggles and the realization of its ongoing necessity is very important – it necessitates, indeed demands, the unity of the various sections of the class independent of narrow interests. Thirdly the entry of women into the workforce is a third development – here I’m not sure we would call it a victory yet, but women today comprise over 50 percent of the workforce. And this has enormous implications for victories over male supremacy and sexism. Fourthly, the understanding of the democratic questions in all of their complexity is extremely important for the working class movement. The winning of the vote for women in 1920 and the Civil Rights victories over segregation in the early 1960s have big implications. We live in an advanced capitalist nation where despite all of its development, the bourgeois democratic revolution is incomplete. Think about that! Here Lenin’s advice about the necessity of fighting to carry this revolution to its conclusion and fighting for working-class democracy is extremely important. Finally I would say that growth of social consciousness regarding equality with respect to race, gender, sexual orientation is another victory. And one must also add here awareness of the issues around the environment and sustainability. Mastering the tactics of fighting around these all-class democratic issues on the one side and class struggle demands on the other is a big challenge for our party.

– Over the past few years, we have seen the growth and activation in the modern United States of many stable, anti-capitalist left-oriented youth groups. Joe, can you tell me about the approximate size and geography of such organizations and comment on their prospects, seriousness of intentions, political literacy and the possibility of consolidation? And – in this context – does CP USA consider it necessary and possible for itself to conduct any strategic dialogue on interacting with them? Is integration possible with political movements parallel to you, if their representatives show themselves to be like-minded people? Who are your party’s current potential partners?

– This question is somewhat difficult to answer, first because of the time frame. What is meant by a “few years”? For example, the contours of the political landscape changed rather dramatically after 2016 as compared to 2007.  Then there’s the question of who or what you mean by “resistant,” “anti-capitalist” and “left-orientated.” These terms are not synonymous.  The resistance as we conceive it, is a very diverse movement some of which is not left.

For the sake of discussion let’s begin marking time with the economic crisis of 2007-2008, the Great Recession. Since then  there has indeed been a growth of the “broad left.” But it ebbs and flows according to time, place, circumstance and issue.  Throughout some organizations and movements have more permanence and staying power, others come on to the scene, have a big impact, and then disappear. Take the Occupy Wall Street movement for example – a hugely important development that arose precisely in response to the banking crisis: it appeared, changed the debate in the country (that was largely focused on neo-liberal deficits) and replaced it with the “99 percent v. the 1 percent.”

And then there are other movements and currents extremely significant in their own right: Black Lives Matter, movements around the environment, gun violence, #metoo and women’s rights, immigration, lgbtq rights, you name it.  The U.S. is a big country, and what’s called civil society is huge – literally thousands of local grassroots organizations organized around hundreds of issues.

In addition the political landscape in almost every respect is very different in the U.S. than Europe. Churches for example play a very different role here than in Europe; there is a large democratic and religious left in the U.S., particularly among African Americans but not only.  The peace movement in our country owes a lot to this. Trade unions too are also organized very differently; varying from the European tradition of alignment with political parties.  Even the political concepts of left, right and center have a different application in the American context. Social Democracy for example, while a presence in America has no where near the same history and influence as compared to Europe. Much of what we consider left wing would be viewed a centrist or even to the right by Westen European standards.

With respect to the organized socialist or Marxist left the picture is somewhat different. After 2016, due to the impact of the Sanders presidential bid and Trump’s election, the democratic socialists experienced tremendous growth.  The communist party grew as well but not nearly as much. On the other hand, there’s been a crisis of middle-class radicalism, a collapse and division amongst the Trotsky and other sects.

It’s important to realize that there is also a significant left presence in the trade unions, particularly at the state and local level and among some of the mass democratic and civil rights organizations and movements. Over the last year there’s been a significant increase in the number and quality of  job actions and strikes. Something very important is developing in the ranks of the organized working class that must be included in any assessment.

With regard to our approach to mass democratic and class struggle – if you’ll accept my reframing of your question – our approach is to participate wherever and however we can. The Trump movement, if not arrested, represents a fascist danger.  Building the unity of the movement to defeat his presidency, in the U.S. Congress and more broadly in society is therefore at the top of our political agenda.  At the same time, the struggle for democracy is bigger than Trump – much bigger. Therefore one must always keep in mind how to bring forward the deeper, more radical reforms that are required to address the deep crisis taking place in the country.

We participate in a left electoral coalition with several organizations that has the aim of working toward political independence both within and outside of the Democratic Party.

So the situation is quite fluid and complex. With respect to all of this, we pursue a united front policy, that is, finding areas of cooperation based on issues without ideological preconditions.

Political unity however is more elusive and cannot be separated from its ideological foundations. This is particularly so with respect to what are called strategy and tactics but not only.  Some on the left downplay participating in elections; others discount the need for broad unity; still others reject the idea of working-class leadership of the broad democratic movement.

With respect to younger generations who are playing a very significant role in the fight for a better life special approaches are needed. Young people are being radicalized, are coming to Marxism,  in very specific circumstances and conditions. 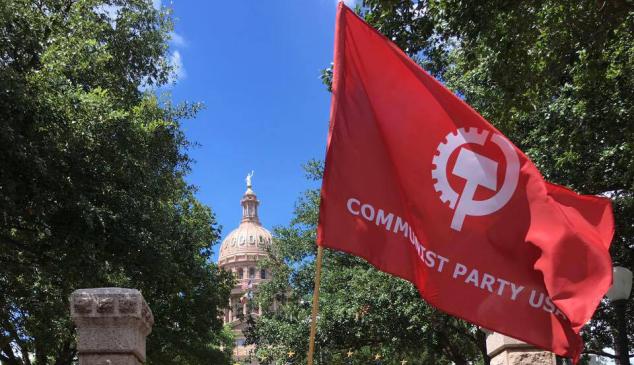 So in general we’d say that the articulation of a consistent working-class revolutionary outlook, generalizing it, connecting it with ongoing struggles: it’s quite an undertaking particularly when other organizations and movements are involved. The key is building trust and confidence, mastering united front strategy and tactics  – deep involvement in mass struggles of our class and people.

– Thank you, dear comrade Joe, for our first, but extremely interesting and important conversation!