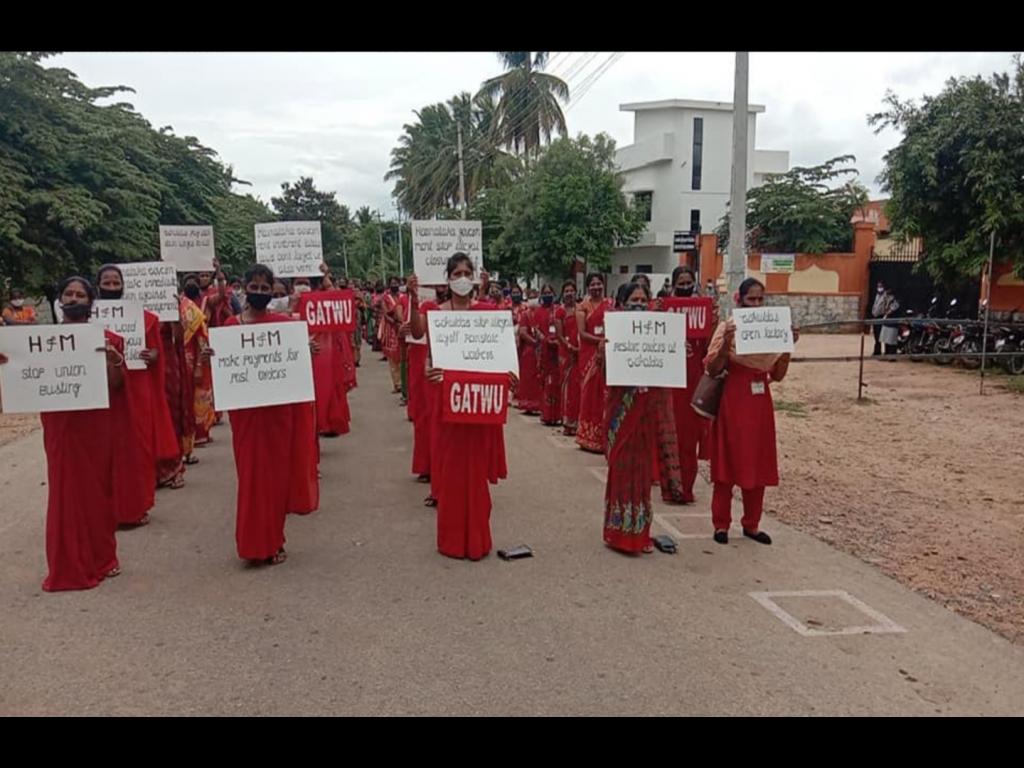 In July 2020, more than a month has passed since the day when the workers of one of the garment factories owned by the US corporation Gokaldas Exports, located in India, staged a strike, fighting for the conditions of their existence. Indian women workers earned less than $ 4.50 a day, which was barely enough for a semi-impoverished existence in a third world country. This is not one of the ordinary events of the class struggle waged in many countries of the world with the owners of factories and enterprises. The fact is that Gokaldas Exports is a supplier of the H&M, Gap and Adidas brands. The main reason for the strike and protests of Indian women is the illegal dismissal of 1,200 women workers at the only factory where the union operates, militant and came together with women working in difficult conditions to understand and the need for class struggle against the administration and owners of Gokaldas Exports. After all, otherwise, if the workers of numerous factories of Gokaldas Exports continue to humble themselves, endure, and leave for the almost impossible search for new work, – the cruel indifference to the workers of the transnational bourgeois class, which conducts profitable layoffs of thousands of deceived workers, explaining the need for layoffs “by the causes of the pandemic and the global economic crisis “. In fact, the world’s bourgeois elites carry out manipulations that are beneficial to them for the sake of a permanent redistribution of property. And the executors obedient to them – the directors and administrations of factories, where new layoffs will be appointed “from above”, carry out these layoffs with impassive faces – expelling people who have worked for their owners for decades, illegally and without issuing social benefits. In the same factories where women workers are still needed, the management and co-owners will cut wages whenever they want, intimidating workers with constant threats of new layoffs. Although it happens that officials serving transnational capital in the third world go to the worst crimes against work ethics …

Gokaldas Exports owns 20 factories in different locations in third world countries. On June 8, 2020, the management of one factory announced the dismissal of workers employed in the only factory with a union. According to Indian law, factories employing an unknown number of workers must first obtain government approval for dismissal. Since at the time of the decision, the factory employed 1200 people, the dismissal was illegal.

On the same evening, the workers organized a sit-down strike at the entrance, which continues to this day. During the events leading up to the layoffs, Gokaldas Exports’ only customer was Swedish fashion giant H&M. But events have changed. Gokaldas management refused to participate in meetings held by the National Monitoring Committee (NMC), which operates under a global framework agreement signed by H&M and IndustriALL Global Union. The official Unions United has become involved in a reconciliation process organized by the Department of Labor.

A month later, on July 8, management still attended the NMC meeting, but refused to take on any commitments or deal with the union issue in good faith.
Moreover, the administration of Gokaldas Exports began to harass the rest of the workers, forcing them to resign. There are audio tapes in which bosses warn that the factory will not resume work until the workers quit, and that they will only be able to receive their payments after they are laid off.

The women workers who were forced to resign reported to the union about pressure from the management of Gokaldas Exports, which went for broke, sending their officials to bypass villages where workers live, forcing them to be fired, intimidating and threatening to withhold payments until they quit, and then they simply will have nothing to feed their families. This time, union members, with the support of community leaders, managed to resist pressure from the leadership. IndustriALL general secretary Walter Sanchez commented on the situation as follows: “The behavior of Gokaldas Exports violates international labor standards; this is a clear violation of the right to freedom of association, which is a cornerstone of our Global Framework Agreement with H&M, and therefore a clear violation of the GFA itself. IndustriALL will under no circumstances tolerate the destruction of a union and intimidation of its members. We stand in solidarity with the courageous workers who have resisted pressure of all kinds during the pandemic for more than a month to protect their jobs, wages and their union.”

IndustriALL Global Union pledges to reach out to all brands of Gokaldas Exports factories, including H&M, C&A, Marks & Spencer, Gap, Adidas, Bestseller, to ensure that basic labor rights are respected.

There are links to videos of Gokaldas Exports bosses walking through Indian villages where workers live and trying to get them to quit. These videos can serve as proof of what is happening.

We call on all workers to join us in your solidarity to support the Gokaldas workers in their struggle for their livelihood. Download the poster from the link, take a photo with it and post the photo on social networks. Remember to tag IndustriALL and use the hashtag #GarmentWorkersNeedUnions.

Thanks in advance for your support!