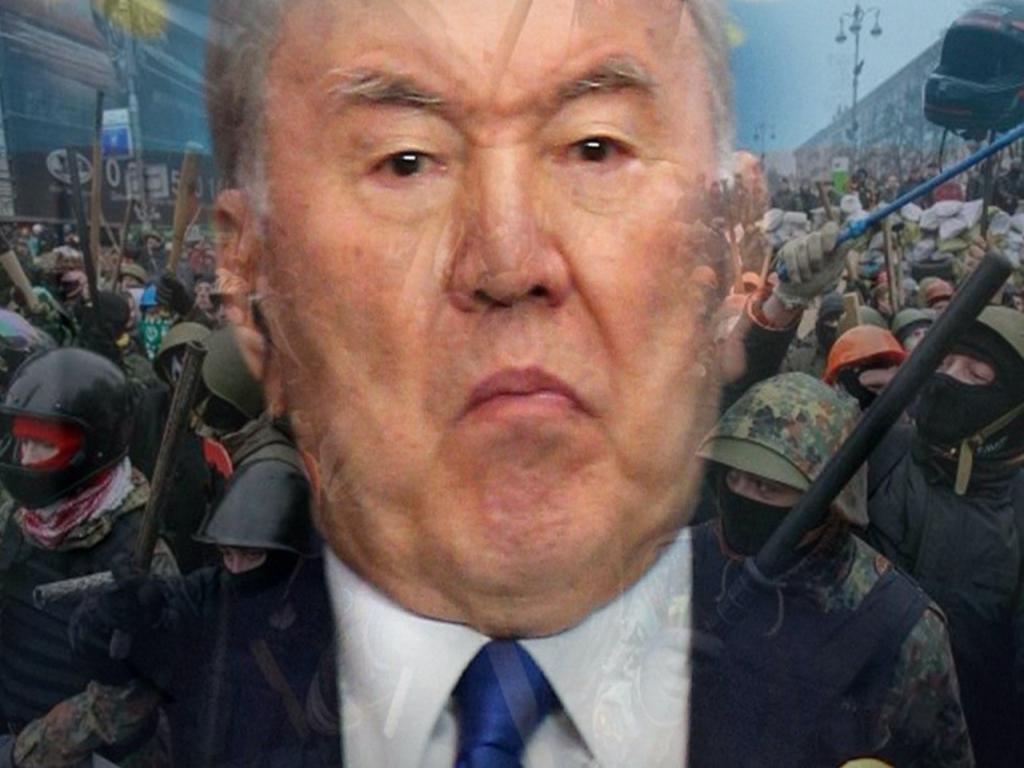 On August 30, 2020, the former president and the current de facto dictator of Kazakhstan, Nursultan Nazarbayev, with his “feudal lords” and an army of officials, celebrated another anniversary of the adoption of their Constitution, presenting their feast during the plague as a national holiday: after all, such a Constitution that allows the ruling elites to manage “cattle in this way “Are extremely rare. It was adopted in 1995 in a fraudulent referendum, which became a fundamental stage on the path of usurpation of power by the local “Bonaparte” who created the Kazakh regime, the coup of November 1993, when Nazarbayev dissolved the Supreme Council of People’s Deputies of the Republic of Kazakhstan. 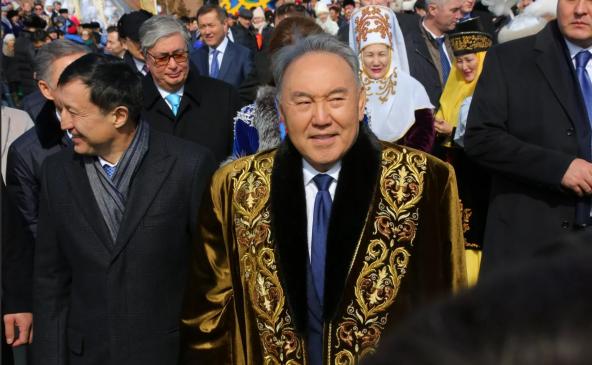 Then the “accomplices” of “Elbasy” (“Fuehrer of the Nation”) Nazarbayev, including the notorious and irreplaceable Igor Rogov, “blinded” the dictator and super-arbiter with a new Constitution, which in some way was copied from the French model, but in the Asian “list” The president received unlimited powers, was the head of the executive branch, and the “fig leaf” of the bicameral parliament was perfect for a convincing props that “accepted” only projects that were submitted by Nazarbayev himself. Local representative bodies – maslikhats – did about the same function. They are only an appendix to the expression of the will of local akims (“akim” – the head of the local executive body of state power in Kazakhstan, – ed.), Appointed from above by akorda (“Akorda” – the Residence of the President of the Republic of Kazakhstan, – ed.). The masses were completely deprived of their voice, as was the case only in feudal times. The deprivation of opportunities for representatives of ordinary Kazakhs to participate in the political life of the country is not accidental: the “nightingale” of the regime, Yermukhamet Yertysbayev, understood then that the bulk of voters, who expressed their violent discontent with the collapse and privatization of industry, the destruction of the aul (“aul” is a small peasant settlement in the countries of Central Asia, – ed.) in the form in which it existed, and the emergence large owners from among those close to Nazarbayev, who he called the “traditional electorate”, should be neutralized, which was done, because the representative bodies now in Kazakhstan are no longer an obstacle to the establishment of the most severe form of primitive capitalism, disguised as “radical neoliberal economic reforms”, under ideological cover of which it became possible to maximize the enrichment of the ruling elite due to the robbery of the present and future of the working Kazakhs: merciless, irreplaceable development of mineral resources and the ultimate oppression of workers, deprivation of any semblance of labor legislation.

“Elbasy” (“Fuehrer of the Nation”) Nazarbayev, as befits a super-arbiter, could, if necessary, change the Constitution of Kazakhstan, as he wanted, which he used over the past two decades. In 1998, the required threshold of 50% for voter turnout was removed, and in 2007, a joint meeting of the Mejilis and the Senate passed startling amendments in 18 minutes, giving Nazarbayev the right to run for president an unlimited number of times.

In addition, there is an unrepresentative “Assembly of the Peoples of Kazakhstan”, which is an artificial, stillborn formation of the country’s body. The “Assembly”, which may have been copied following the example of the Cortes of the fascist dictator Franco, appoints its obedient deputies to the “puppet” parliament. The result of the adoption of a new political system, enshrined in the Constitution of Kazakhstan, were:
– Pension reform on the Chilean model in 1997, with which the inhabitants of South American Chile are unsuccessfully fighting. The adoption of such a pension reform finally finished off the solidarity pension system: after all, the pension savings of the working class of Kazakhstan go to support the banks belonging to the “Elbasy” (“Fuehrer of the Nation”) family;
– The Land Code in 2003, when for the first time after the collapse of the USSR, private ownership of land was introduced in Kazakhstan. Amendments to the adopted Code give the right to rent and buy land to landowners and foreign corporations; – The Law on Trade Unions in 2014, which finally deprived workers of the rights to create their own associations, and almost immediately, in 2015, the legislative introduction of the new Labor Code – a miserable semblance of the former Labor Code. All this plunged all the working people of the country into a state of slavery;
– The 1998 Criminal Code (amended in 2014), which criminalized holding peaceful rallies, participating in unregistered parties and trade unions, organizing “illegal” strikes, and inciting “social hatred”.

One could still enumerate many more anti-people laws and decisions “adopted” under the control of the dictator, the Kazakh parliament and the government, in order to change the socio-economic formation and deprive the masses of all social, economic, political and civil rights. As mentioned above, dictator Nazarbayev, having appropriated the title of umpire, in this crucial historical period of the counter-revolution acted in the interests of the nascent class of the big bourgeoisie from among his family members and close oligarchs, bankers, latifundists, as well as transnational corporations, since the 90s. snatched tidbits of deposits and flagships of the country’s ferrous and non-ferrous metallurgy.

But personal power, apparently, for a despot does not have much. In 2017, Nazarbayev took a step further, deciding, under the guise of regular “constitutional amendments”, to establish … neither more nor less – a dynastic system of succession of power. The necessary changes in the Constitution, adopted by the puppet deputies of the Mejilis and the Senate in March and April, formally increased the powers of the parliament and government, without changing the essence of the political content of the regime at all. On the contrary, thanks to the once proudly called “people’s deputies”, modern parliamentarians have erected a whole complex of anti-popular barriers. So, the new edition of the 10th article of the Constitution introduced norms allowing to deprive Kazakhstanis of citizenship by court for anti-government activities, which was not only a safety net for the regime – strengthening the repressive machine, but, to a greater extent, final protective measures to ensure the safety of the ruling clan, ensuring suppression attempts at any resistance by the working class.

In addition, the deputies of the puppet parliament of Kazakhstan in May 2018 removed the clause in Article 55 of the Constitution of the Republic of Kazakhstan that they had previously reviewed, which in theory allowed citizens to self-nominate themselves as candidates for the presidency. In such a simple way, Nazarbayev’s clique cut off any initiatives of the people who were candidates for the Presidential role that were not under the control of the authorities. Indeed, otherwise, in the event of the death or prolonged hospitalization of “Elbasy” (“Fuehrer of the Nation”), the people had a chance to show their activity. At the same time, a formal increase in the role of parliament and government was ensured – only for the same, frightening feudal clan regime, the goal – to exclude the masses from the election of the future head of state.

As recent events have shown, the announced reforms to “democratize” the political system were actually also just a smokescreen, in fact, only strengthening the power of the ruling family. After all, it is extremely important for her now to keep the throne in her hands. For the sake of the same, the regime refused, and not arbitrarily, but having previously prevented such a decision, from holding nationwide presidential elections, so that power in any case would remain and would thus be approved by the members of the Nazarbayev clan, who occupied key posts within the puppet parliament. The same story is with the election of Kassym-Zhomart Tokayev to the post of “president”. After all, when there was nowhere to go, even under the protection of the repressive apparatus and under legislative protection, in order to generally exclude among the people “passions for a new ruler”; The “current president” K.-J. Tokayev is only a weak-willed puppet in the hands of Nazarbayev.

But further – even more. Nazarbayev consistently introduces the concept of “class” into legislation, which legally legitimizes the new aristocracy. So, for example, the ban on class strife in the Constitution existed for a long time, but it was introduced into the Criminal Code only now. Recently, the Ministry of Justice of Kazakhstan “proposed” to introduce criminal liability for causing grievous harm to the vital interests of the state, which provides for punishment from 15 years in prison to life imprisonment, or even the death penalty not prohibited in the country, of course, with confiscation of property or expulsion from the country. Isn’t it true that the adoption of such a legislative norm is very reminiscent of the medieval customs of the Chinese dynasty of emperors?

Nazarbayev’s unborn “aristocracy” is called upon to take seats in the future parliament, in which, using a beautiful tradition, one of Nazarbayev’s sons from their third marriage will be raised and crowned on a white felt mat. The same parliament ensured the status of his daughter, Dariga Nazarbayeva, as the “supreme estate”, who, as prime minister, or speaker of one of the chambers, or, in the most extreme case, interim President, will act as regent in case of death or prolonged hospitalization father. This mechanism has already been launched. It will also be accompanied by new redistribution of property and power, because from the heiress of “Elbasy” (“Fuehrer of the Nation”) – Dariga Nazarbayeva, her numerous clan of relatives, in case of doubt about the powers erected on them, under the guillotine of purges and reprisals for imaginary “conspiracies”, the heads of all those who may in reality or potentially be in the path of the predatory Nazarbayev family.

For the working class of Kazakhstan, for ordinary residents of the city, especially for the working people of the disenfranchised popular agrarian masses, in this situation, when they are completely excluded from political processes, there is only one way left – a decisive radical revolutionary struggle in order to radically change the entire socio-economic and political building and vector of development of the country.

The plans of “Elbasy” Nazarbayev were nearly thwarted by the masses who rallied in April and May last year to protest the transfer of millions of hectares to Chinese corporations and latifundists. That is why Nazarbayev decided to arrange a demonstration trial of Maks Bokayev and Talgat Ayan – and other defenders of the land, in order to take revenge on them and their families, to try to finally intimidate the masses of Kazakh citizens – it would be better if they even forget that they are citizens of the country. 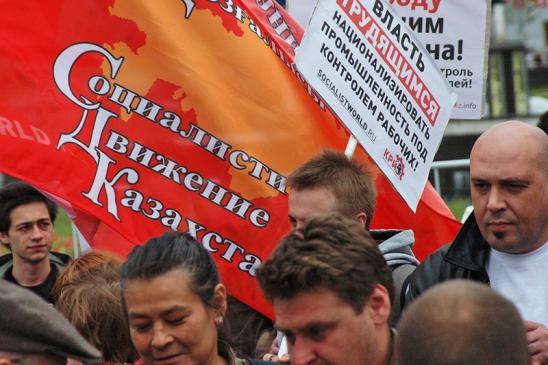 Fearing the actions of the masses, who have nothing to lose, despite the horrific reprisals and repressions, Dictator Nazarbayev temporarily removed the scandalous amendment to Article 26 of the Constitution, which gives foreigners the right to buy land in Kazakhstan. This seemingly single and no longer playing a role concession suggests that the people of the Republic of Kazakhstan have no other historical opportunity to break out of the loop of new feudalism. Apart from mass rallies, strikes, radical protests with the aim of returning the land, factories and factories, the country’s mineral wealth back into their hands, there is no other way to free the people! The Kazakh people deserve to be in the XXI century. become stronger than the predatory ruling clan of oligarchs, and prevent the final introduction of the monarchy in the country!