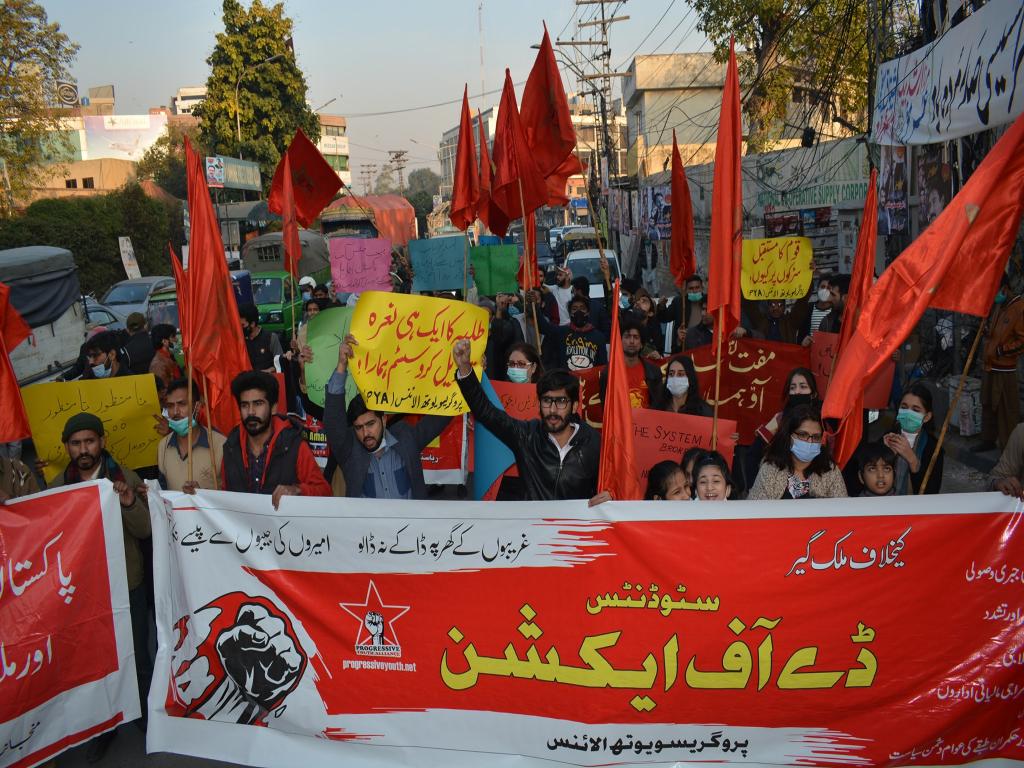 DAYS OF REVOLUTIONARY ACTION BY STUDENTS AND WORKERS IN PAKISTAN

At the end of December 2020, the regions of Pakistan ignited the young flame of the revolutionary Resistance to the policies of the reactionary Islamic pro-capitalist state. Our associates, comrades from the Pakistani revolutionary movement Progressive Youth Alliance (PYA), have raised thousands of young citizens in dozens of cities across the country in a massive struggle for the rights of students and youth in Pakistan by organizing a nationwide protest called Student Action Day – for free the formation and restoration of student unions; and against sexual and other violence against women, state abductions of civilians and mass unemployment. Participants in all cities also raised slogans about the release of the revolutionary leader Comrade Amar Fayaz, who was kidnapped by agents of the government’s Inter-Services Intelligence-ISI back in November and Fayaz’s whereabouts are still unknown. These are the first mass rallies in Pakistan clearly showing that young people are interested in revolutionary politics and socialist ideas, and not the outdated ideas of nationalism and radical Islamism. 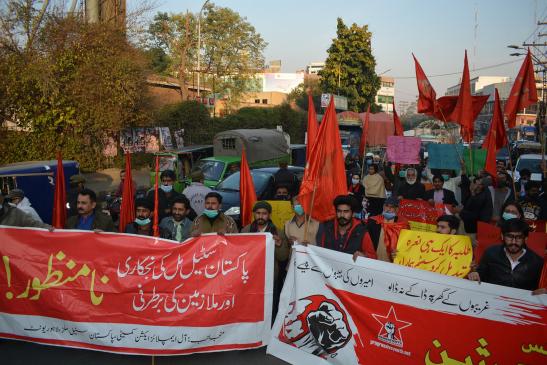 In almost all major cities, such as Karachi, Islamabad, Multan, Quetta, Hyderabad and Lahore and other 25 cities, the public protest activity was impressive: hundreds of students and workers took to the streets.

Karachi is Pakistan’s largest city with a very poorly managed transportation system: People have to travel for hours to get from one point to another. Despite this, a mass meeting took place in the city. Students and workers arrived at “Regal Chowk Sadaar” from Sakhal Got, Marvi Got, Malir, Shah Faisal, and other workers in the socially disadvantaged industrial areas of New Karachi. The rally began at the largest shopping center “Regal Chowk Sadaar”, a subsidiary of the British TNK and reached one of the centers of the capitalist agents of the “Elite Political Press Club of Karachi”, where it turned into a protest. Consolidated by the leaders of the Progressive Youth Alliance (PYA): Comrades Adil Aziz, Zainab, Aftab and Anand, Anam Khan of the Red Workers Front (RWF); Sami from the Shahid Zulfikar Ali Bhutto Institute of Science and Technology (SZABIST); Ali from the Democratic Students Federation (DSF); Ramzan from the garment factory and Aziz Khan (president of CBA General Tires) spoke at the end of the rally.

An impressive turnout of youth protesters took place in the Pakistani capital, Islamabad. Hundreds of students and workers joined the bicycle rally, which began in Guri and ended in Hostel City. On the way, he stopped at different places where the Pakistani revolutionary movement Progressive Youth Alliance comrades spoke. The first stop of the rally was Burma, then Tramri Chowk and finally City Hostel. Medical workers from the Pakistan Institute of Medical Sciences (PIMS) hospital, who are protesting against the privatization of their facility, also joined the rally in large numbers.

PYA comrades have been at the forefront of the anti-privatization movement of PIMS workers in Islamabad. Workers forcibly fired from Allama Iqbal Open University also joined the rally, which only picked up steam from the start and ended with a large crowd and great enthusiasm. Sangar Khan, Ali Raza, Haris and Masud from Pakistani revolutionary movement Progressive Youth Alliance ; At the end, Umar Riaz from RWF and a representative of the Grand Health Alliance spoke.

In Quetta, the most important city in Balochistan, hundreds of students, workers, political activists and trade unionists joined the rally of thousands. The action began in the Metro and ended at the Press Club. Comrades Basit Khan, Sima Khan and Amir Ayaz from Pakistani revolutionary movement Progressive Youth Alliance, Razzak Gorzang from the Red Workers’ Front, Mom Salam Baloh (Chairman of the Pakistan Workers Federation), Pir M. Kakar (from Water and Energy Development Authority, WAPDA) and other political activists spoke at the conference … end of the meeting. The rally clearly shows that young people are interested in revolutionary politics and socialist ideas, not outdated ideas of nationalism. It is usually said that “there is no place on the left for new organizations other than traditional ones,” but the rally and overall growth of the PYA prove this to be completely wrong. Marxist ideas have a wide audience. 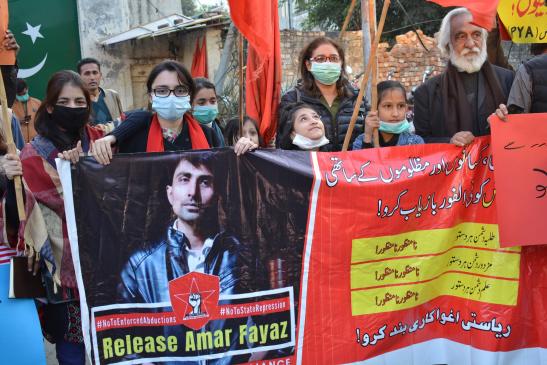 In Hyderabad, the second largest city in Sindh, there was also a massive protest wave, not predictable even by the authorities in the region. More than 200 students, workers and political activists joined the rally, which began at Nasim Nagar and ended at the Hyderabad Elite Political Press Club. During the rally, hundreds of posters with images of Che Guevara, Karl Marx, Lenin and Trotsky were raised high. The Sindh youth also reject nationalist policies that were once left-wing, have now become their opposite and reactionary. This rally proves once again the massive thirst for scientific revolutionary ideas among young people. Comrades Sarmad Siyal from Pakistani revolutionary movement Progressive Youth Alliance, Ali Essa from RWF, Akib (student protest representative from PMC), Jai Kumar from Progressive Students Federation (PRSF) and Samina Wahid (Sindhi poet) concluded the rally with conceptual speeches of radical revolutionary art.

There were also about 1200 people in Lahore. The Manifestation Bike Ride covered more than 15 km. On the way, the comrades raised revolutionary slogans, which found a brilliant response not only among the protesters, but also among the people watching from their shops and houses. A whole caravan joined the rally at Chaburji. They were joined by laid-off workers from the Pakistani Metallurgical Plant. Comrades Sanaullah Jalbani, Babar Ali, Sabir Gondal, Mishal Vine and Rai Assad from PYA; Rao M. Naim (Action Committee of All Employees of the Pakistan Steel Works); Dr. Farhan Gohar from Grand Health Alliance, Maksud Hamdani from WAPDA and RWF; and Nisar Safdar (renowned jurist) spoke at the end.

Smaller and less developed cities such as Mithi (Sindh) and Karan (Baluchistan) have also shown an outstanding turnout. Mithi is a backward area in Sindh with no basic amenities. Here, the mega-holding that runs everything has caused a stunning aggressive resistance resonance. Likewise, Haran is one of the most underdeveloped areas in Balochistan, which has faced many conflicts in recent years. In these difficult conditions, our comrades mobilized more than 560 people.

It was the largest political event organized by any leftist organization in Pakistan in recent history. The Pakistani revolutionary movement Progressive Youth Alliance mobilized thousands of people across the country and schools were closed. It also demonstrates that students and workers are angry and looking for a radical program. There is a huge political vacuum in Pakistan. All political parties have been discredited due to their anti-labor policies. Medical students are protesting across the country. We will soon witness a massive explosion across the country. A massive strike has already begun in Ravlakot and the surrounding towns of Jammu and Kashmir against the lifting of subsidies and higher flour prices. 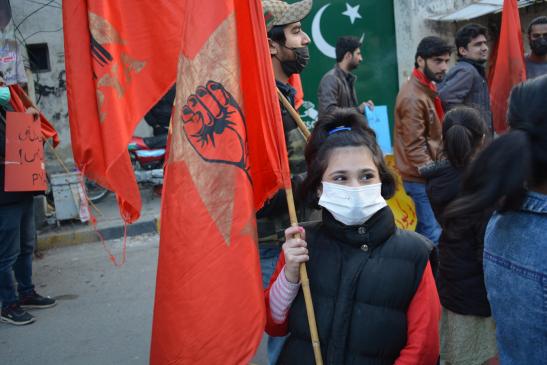 Within the framework of capitalism, a solution is impossible; the anti-labor policies of Pakistan’s ruling class will continue. The economic crisis will intensify, the abyss of social differentiation will only increase; poverty, homelessness, lack of education and health care will worsen. Only the socialist revolution of the working class; a violent change of the social and political system of Pakistan can solve many of the country’s social problems. The Pakistani Resistance now more than ever needs internationalist revolutionary coordination and the formation of a single governing opposition headquarters to point the working class on a radical path forward and organize it to overthrow the capitalist system. This Revolutionary Action Day may be a step forward in this direction for the Pakistani people.