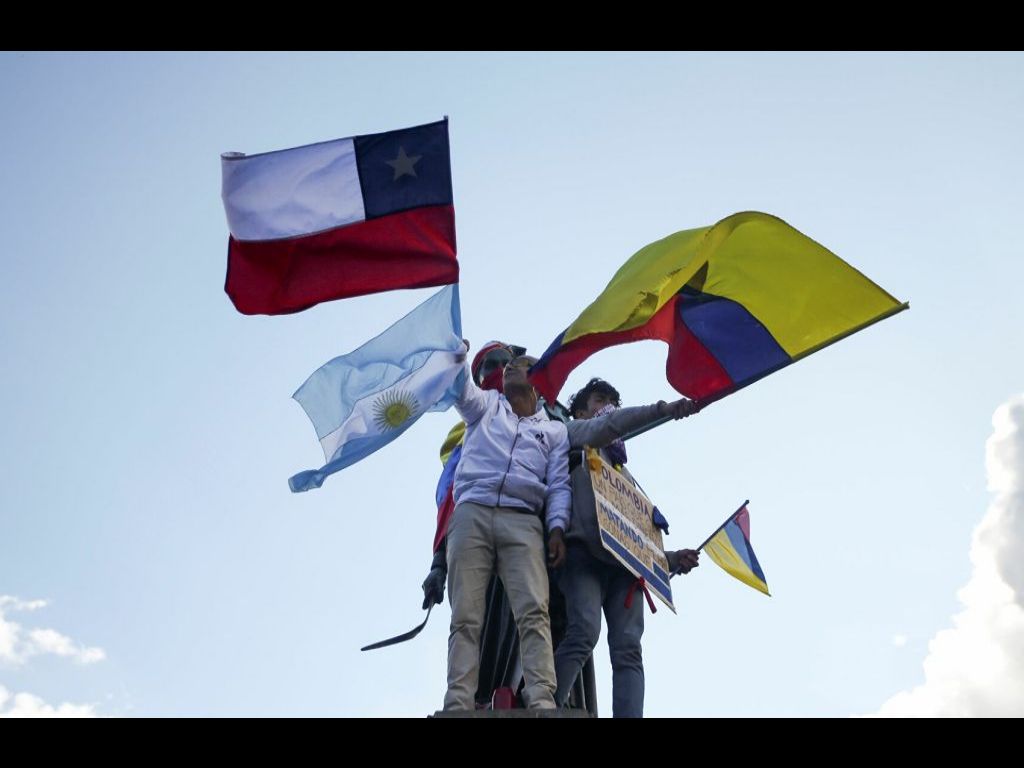 CONGRESS OF THE PEOPLES OF COLOMBIA

DUKE, STOP THE GENOCIDE AND CRIMES OF THE NEO-LIBERAL POLITICAL MODEL!

The Colombian people continue their protest mobilization in the struggle for their violated rights and dignity, which began with a nationwide strike at the end of April 2021, continued with ten thousand protests in Bogota and major cities of the country, and has been going on for the second week. However, in fact, the popular class struggle in Colombia has not stopped since November 2019, and at present we can observe its most acute and large-scale stage, in which thousands of Colombians – workers, students, peasants, representatives of indigenous peoples – take part. Colombia, following the awakened Chile, stood up in the fight against the government of President Ivan Duque, whose coming to power extremely deepened social segregation and polarization of the population, increased the impoverishment of various social strata, and actually legalized the lawless anti-people war of the ruling capitalist class against popular activists, former partisans – FARC combatants, as well as against peasants and representatives of indigenous Indian communities. the large-scale protest mobilization of the urban and rural population in recent decades.

The power of the protest mobilization and decisive struggle of the Colombian people in the last week after the announcement of the decisive National Strike was not defeated, but, on the contrary, intensified. During these days, the popular protest has accumulated a number of victories: the cancellation of the tax reform, the resignation of the criminal minister Carrasquilla, and also the resignation of the mediocre and cynical Chancellor Blum.

In addition, the requirements of the student movement were partially satisfied: in the next semester, zero enrollment of students was announced for applicants from the most socially vulnerable segments of the population.

The call of the government of I. Duque “for dialogue” did not embarrass those who participate in the nationwide social mobilization: you CANNOT negotiate with the government, whose hands are covered in blood.

The lack of an expected response to the government’s double-faced call for “peaceful dialogue,” which boiled down to a demand to end the protest mobilization, made the fake essence of the real government obvious. In anticipation of the end of the protest, it only resorted to projecting the required social programs on the vicious strategy of expanding the national government, which implies strengthening its model, the essence of which is the further strengthening of the militarized repressive apparatus, which suppresses entire territorial regions of the country and poses a danger to human lives.

We only received confirmation that the oligarchic neo-fascist regime and the government in power – everything, without exception – is trying to resort to negotiations only in order to neutralize and deactivate social protest. Thus, the authorities have demonstrated that they are not going to fulfill what they promised, including to those protest activists who agreed with them.

The national strike showed that there are people who raised their voices in protest – they do not sell their dignity, pinning their main hopes on a radical change in life in the country and the restoration of those rights that the people have historically been deprived of. Only global, structural changes in the country will atone for the sacrifices that the people suffered during the two-week period of their protest. As its result, we wish to build a truly PEOPLE POWER. That is why WE CALL ON THE DUKE GOVERNMENT TO IMMEDIATELY FULFILL the historic demands of the Colombian people:

1. Stop the war against your own Colombian people, social and ethnic genocide. We demand truth, justice and punishment for the crimes committed in the suppression of the National Strike and the repression of peaceful protest, which complement the systematic violations of human rights. In the face of these events, the Minister of Defense of the government acting against the people, as well as the commanders of the national police and the armed forces who led the repressive state apparatus and semi-state violence, must resign.

2. We do not believe in useless “negotiation tables” that do not change anything. The government knows and must comply with the demands made by peoples, communities, social sectors and regions in their various specifications, as well as the demands made in the framework of the National Strike. We demand the abolition of all neo-liberal laws that generate oppression and exploitation of the working majority. If the government insists on maintaining its corrupt and criminal neo-liberal model, people will continue to fill the city streets, exclaiming: “CRIMINAL GOVERNMENT, GO OUT!”

3. We call on the international community to resort to international control and supervision over what is happening in our country. Let international observers accompany our struggle. We call on them to condemn the criminal attitude of the Colombian government towards popular social protest; and – to hold government representatives accountable for the genocide against the peoples of Colombia. The oligarchic regime, headed by the ruling duet of shadow structures Alvaro Uribe and I. Duque, is directly responsible for the genocide against the popular majority, for the orders they gave for military action against people who protested against the lawlessness at all levels. We expect that international and national justice should respond to the calls of the people and bring to justice all those responsible for anti-popular crimes. We cannot allow young people to continue to be killed. We must re-fill the youth of Colombia with the hope of building a dignified future.

This is the mandate of the free people of Colombia mobilized in a united popular protest. Therefore, the strike and our demonstrations continue, and we will remain on the streets and highways of the cities to intensify the protest wave. Fulfill people’s dreams of a just and dignified life. We, men and women, weave with our protest expression of will HOPE AND PEOPLE’S UNITY IN RISE FOR OWN DIGNITY. Endurance and resilience in popular resistance is a spark that will generate energy and spirit to continue our struggle. We raise the slogan:

In their Resistance, even at the cost of losing their lives, people do not give up!

Congress of the Peoples of Colombia
22 May 2021
Resistentiam.com