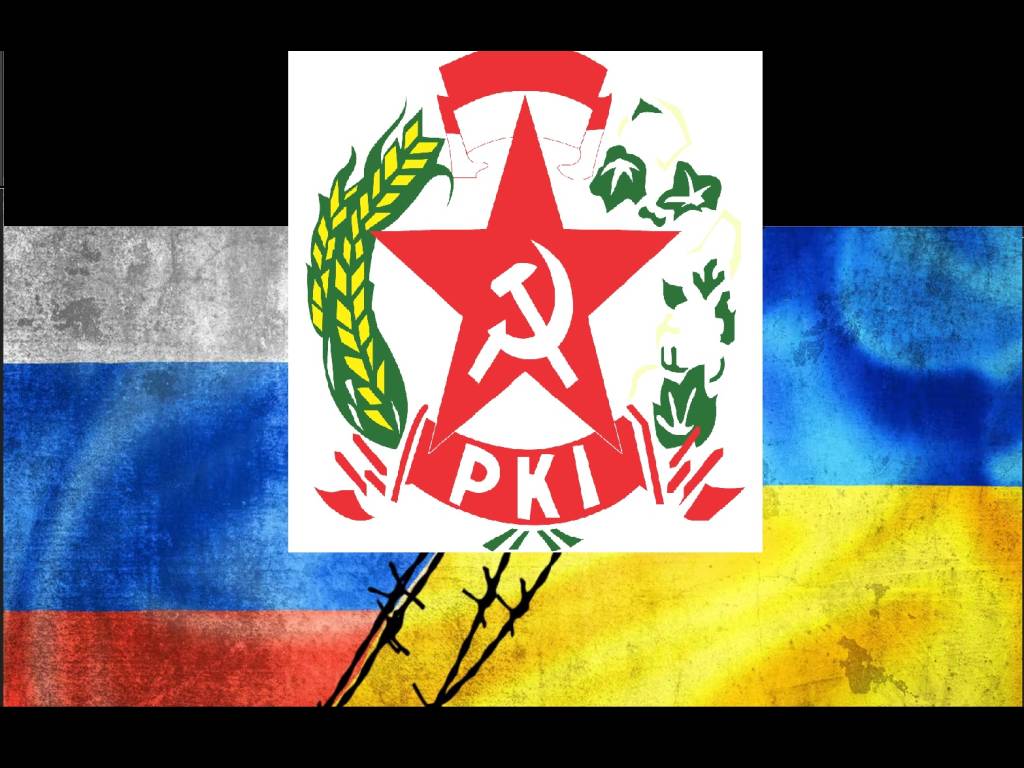 WE CONDEMN THE IMPERIALIST STRATEGIES IN UKRAINE!

Initially as the Communist Party Indonesia we condemn the war on Ukraine by the Russian Federation. With the same spirit we condemn the US and NATO-Imperialist War Machinery as the principal aggressor of all wars in post cold war period and using Ukraine as a scapegoat to threaten the security and sovereignty of the Russian Federation. At the same time we condemn the racist and fascist treatments employed by the Ukrainian governments against the minorities and killing of thousands of its own people in Luhansk and Donetsk for almost a decade. But we think due to the complex situation like this condemning of these imperialist acts only would not give a proper understanding of the events to the masses. So it needs to be investigated historically and putting it on the present objective conditions. Because, even though a cancer kills a patient within one tragic day, this cancer has developed to this deadly stage for hundreds of days.

We are observing closely what has been happening surrounding Ukraine and what is currently happening in Ukraine with an utter disdain towards the imperialist agendas. For several months now,western imperialist powers like USA and UK and western media have started a propaganda which massively provoked aggressiveness between Russia and Ukraine. These provoked tensions were used to justify the further militarization and sending more US and NATO troops to east European countries. However, existing tensions between two provinces of Luhansk and Donetsk with the central government of Ukraine and the discrimination towards Russian people in Ukraine had caused the two provinces to align with Russia for almost a decade. Currently, Russia has recognized self-proclaimed Donetsk and Lugansk People’s Republics.

Over the past years USA using NATO, has expanded its military influence towards the Eastern Europe, the countries adjacent to Russia and countries which were members of the Soviet Union before collapsing. Ukraine being situated in a geo strategic point between Russia and other countries of Europe its alliance is crucial to both USA and Russia. Simultaneously, Ukraine as a country has allowed itself to be utilized in the Eastern Europe militarization project of the USA-EU-NATO. After the dissolution of the Soviet Union, USA and NATO started its expansion drive towards East ward establishing NATO military bases in former socialist countries of Eastern Europe.

Just after the reunification of East and West Germany, NATO established its bases in East Germany in 1991. So for the imperialists the unification of Germany was not to bring peace but to build military bases. Then in 8 waves, NATO expansions were carried out since 1997 to 2021 to eastward. The facts show that until 1991 there were only 15 members in the NATO and by 2021 NATO membership has been increased to 28 countries. Why we analyze this NATO and USA’s Global Military expansion is, because without proper evaluations of Imperialist Military agenda anyone can become vulnerable to the propaganda machines of the same imperialists forces.Apart from this, we do aware that USA has established more than 1000 Foreign military bases, It also has recently established QUAD –military alliance for the purpose of militarizing South Asia and another military alliance AUKUS targeting China and South East Asia.USA has signed military agreements with more than 100 countries of the world and with all South Asian countries including Sri Lanka. It withdrew from many non-nuclear proliferation treaties. It trained and financed ISIS and various kinds of extremist, Neo-Nazigroups. It invaded independent countries such as Yugoslavia,Iraq, Afghanistan,Libya,Somalia,Syria and etc…

All these “peace preaching western countries” have been participating all most all the wars initiated by USA in post cold war era .This Ukraine has been participating most of the NATO invasions during 1997 to today.All these bloody wars initiated and implemented by USA and its western allies were clear violations of all international laws and agreements, but except the retaliations from the invaded country there was no ‘Block of countries’ to stop it or threaten it.
All these facts have proved beyond any suspicion that this imperialist quest is for profits and destruction of sovereign States to fulfill that objective and has nothing to do with fake allegations such as ‘Socialism is the reason for War or cold war’, ‘presence of Weapons of Mass destruction’, ‘War on terrorism’and etcetera. Then Soviet leaders including Gorbachev, Yeltsin and the clan, foolishly thought that Imperialists are against only the Socialist Soviet Russia but not a “capitalist Soviet Russia”. However, history has proved again Imperialists wanted not only to uproot Socialism in USSR but it wanted to dismantle this vast independent sovereign state notwithstanding it is socialist or capitalist. When the people of USSR approved the continuation of USSR by 76% in 1991 referendum, US imperialists were busy with their puppets in USSR to dismantle it to 15 states. The Imperialist project did not stop its intention to further fractionation of capitalist Russia, by forming and assisting various separatist groups within Russian Federation.Therefore, we must understand there is no “Imperialist Peace” and “Socialism is not the reason for Imperialist invasions and wars” and in reality the “Imperialism Means WAR!”

For us present day Russian Federation has nothing to-do with Socialist USSR. Today Russia is a capitalist country and junior imperialist power, with heavy lethal power. What the capitalist Russian Federation is doing is the following the exact “military tracks “created by USA and so called western democracies by killing millions of innocent people in all corners of the world. However without denying the facts that Russia continuously stood against Ukraine becoming a member of NATO as it can pose a major security threat towards Russia. Considering the rivalry between western powers and Russia and also the eastward expansion of NATO, this seemed like reasoned demand. We support that any country regardless its size, number of citizens, economic situation and any other differences must be given the same rights and opportunities but in the current world run by imperialists this is not a reality. Even though we do accept the self determination of the nations, such as Ukraine, during the time of Imperialism it’s also not a reality either. When Ukraine was participating NATO wars against sovereign countries, it also neglected the policy of Self determination of Nations. It is clear that being a country standing in between imperialist powers Ukraine could have taken more of a neutral or non aligned stand towards West and Russia rather than an aggressive and it could have avoided this ordeal of a war.

At the same time we would like to emphasize the ability and capacity of the socialism to solve ethnic discriminations and its ability unify masses while protecting their cultural and political rights. The present Russia –Ukraine conflict is a text book example of failure of nation building under capitalism and success story of Socialism. At the time of the Socialist Soviet Union existed it had hundreds of nationalities, religious groups, coexisted and developed together. Refusing the oppressive legacy as the “prison of nations” of Tsarist Russia, Comrade Lenin and the CP of Soviet Union accepted the self determination of 15 republics and guaranteed same equal cultural, economic and political rights.Due to these firm democratic policies USSR proved its ability solve the national question through the policy of equality and democratic rights. Almost 70 years USSR was a country of peaceful cohabitation of various communities.

By collapse of the Soviet Union, working class people of those nations again subjected capitalist exploitation and imperialist agendas. This has become the fate of the Russian Federation itself. The capitalist Russian Federation and its hegemonic approaches and discrimination against the some non Russian populations in Russia have proved the capitalism cannot resolved the questions which were solved by socialism hundred years ago. The present Russian leaderships’ criticism against Comrade Lenin, Communist party of USSR, right to self-determination policy is only a cry of its failures and inability. On the other hand, we have to mention that during the time of USSR, USA was not able to establish a single military base in the countries of not only in Eastern Europe but in central Europe as well. This shows the ability and the power USSR established over imperialist camp without invading any country or without being sanctioned!

This can be applied same to the Ukraine also. During socialist period Ukraine was a relatively peaceful country with harmonies cohabitation of various communities and religious groups. The establishment of capitalism in Ukraine had fueled racist and separatist tendencies. So the present racial civil war in Ukraine is mainly a rotten fruit of capitalist policies of Ukrainian governments after betraying the socialism in Ukraine.

Finally, we extend condolences towards people of both countries who have lost lives and loved ones due to this war. We demand from all the responsible stakeholders of the problem to act immediately to reach a realistic solution to stop further bloodshed and destruction and also to stop it from becoming threat to the peace and stability of the region.

We vehemently condemn and stand against involvement of USA and NATO in provoking conflict between Ukraine and Russia. Military operation of Russia on Ukraine must stop. Neither the Ukraine central governments’ killings and discrimination over LDR and DPR nor the Russian war against the Ukraine will bring peace to Ukraine and security to people of Russian federation. The nationalist sentiments unleashed during this crisis will be used by the rulers of Russian Federation to suppress own Russian masses when the people start fight for their basic rights.

We call the people of the world to understand destruction that has been waged on the world in the ruthless agenda of imperialists to divide and re-divide world between them for the purpose of exploitation and power projection and also to stand against such agendas. Aggressions of imperialists can only be fully confronted by proper internationally organized Peoples Movement and we invite all communist, socialist and progressive organizations around the world to shoulder that responsibility.

Imperialism means WAR! There is no Imperialist PEACE!

Until the elimination of imperialism, billions of people of the planet will face bloody wars initiated by imperialists.

Yesterday it was Yugoslavia, Iraq, Afghanistan, Libya! Today its Syria, Somalia,Yemen,Palestine, Ukraine! Tomorrow it will be any country you name!