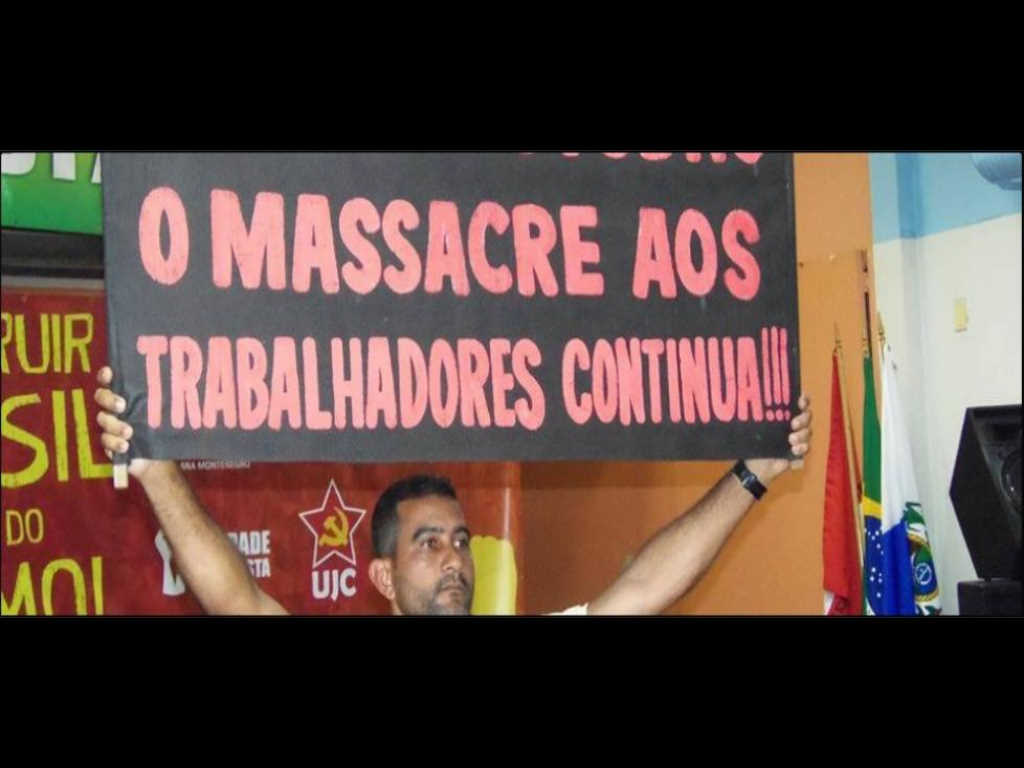 “CLASS UNION” OF BRAZILIAN IPATING: RESUME TO USIMINAS … THE MURDER OF WORKERS CONTINUES !!!

Metallurgical industry Usininas was owned by the state and was privatized on October 24, 1991 as part of the program of privatization of the then president Fernando Colora. Metallurgy Ipatinga in the Vale do Asu region has since entered a heavy privatization process, placing workers in the production perspective for the sake of production and fulfillment of production goals, strong pressure, increased risks, precarization.

Since the beginning of the severe crisis of the capitalist system in 2008, Usininas has been transferring a significant part of the labor force to outsourcing. The situation is similar to precarious, the company lacks labor protection and protection and safety equipment, and so on.

In 2012, 2013 and 2014, thousands of metallurgists were dismissed, and this was always justified by a lack of finance and an economic crisis. From another point of view, contracting contracts were an obvious practice of putting employees of the company behind the staff to perform the same functions for less salaries. The return to the discussion of outsourcing and the reduction of labor rights is topical, as governments, legislators and standardizers work together to undermine the entire working class. And in this sense, an attempt to devastate and weaken the union (Syndicate of metallurgists Ipatinga and the region) became evident in the maneuvering of the transfer of branches to Sintec, SENGE and Sintravaco (a contractors’ union created fictitiously). The goal of this attempt is to reduce the representativeness of SINDIPA and help the company and contractors to pre-carise and increase the exploitation of employees and employees.

The fatal accident occurred at the Usininas plant in Ipatinga on August 8 with Luis Fernando Pereira, just 38 years old, an employee of the contracting firm AMOI, which provides services for the maintenance of Usininas equipment. The metallurgist had a wife and three children. August 10, 2018, there was an explosion gasholdera. As members of the trade union of metallurgists report, 32 people applied for medical help to the Marcio Cunha hospital. The report notes that one worker received shrapnel wounds to the face and other, more severe, injuries. However, the union SINDIPA was not allowed to accompany the rescue team and the victims to the hospital, and so he limited himself to messages from relatives, friends of the victims and the employees of Usininas themselves. At the moment, there has been no calculation of the deaths in the company, and we do not have reliable data.

At the moment, there was no calculation of the deaths in the company, and we do not have reliable data. The history of heavy accidents on the company’s territory is rarely taken into account at the Usininas plant, and when employees die, information is published that workers die on the way to the hospital, rather than inside the enterprise. Here it should be noted that on several videos published in social networks, dozens of metallurgists run in different directions, because they did not pass safety training in emergency situations, and worse, it occurs a few meters from the gas holder, which is not exactly known whether it contained it is a harmless or poisonous gas.

Regarding the incident at the mentioned steel plant, it is obvious that the company is not ready for serious incidents, because security procedures exist, but workers are not ready for how to behave in these cases. And what is even more serious, the population was in tense expectation, presenting evacuation work, which was about to begin, but they were not. There was not a single signal like the sound of a siren that would alert residents, nor other measures that employees and the public could take to prevent the consequences of the accident, which, in our opinion, could have been avoided.