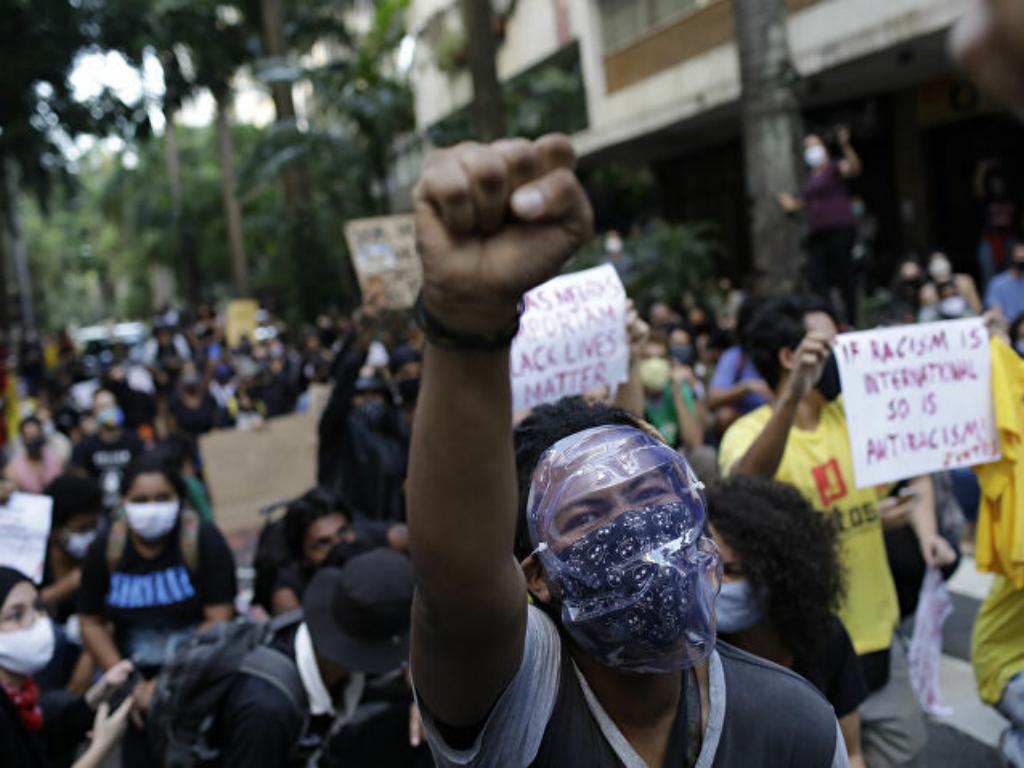 The mass protests that swept the western hemisphere of the Earth in the last days of May swept Brazil. On Sunday, May 31, in Rio de Janeiro, thousands of people took to the streets and squares, protesting against the ruling fascist regime in Brazil. An anti-fascist demonstration demanding the resignation of President J. Bolsonaro was organized by numerous Brazilian leftists, with the active participation of the left sector of football fan groups. Inhabitants of the Brazilian capital came to protest from all the dull outlying favelas. The fact that football fans, representatives of the popular Flamengo club in Brazil, actively participate in the left protest wave, says a lot. First of all, that the puppet regime of the clan to J. Bolsonaro, with its repressions and anti-people policies in recent months, has heated the atmosphere in the country, is becoming extremely unpopular in the ever wider social strata of Brazil.

The government of this Central American state is pursuing a policy characteristic of the far-right regimes of Latin America that have existed in its history for the past century and a half with the active support of the government of its northern neighbor – the United States. Representatives of the ruling clan, J. Bolsonaru, use neo-fascist statements in propaganda rhetoric – and this can not but outrage the public and people of the country, which in the last decades of the twentieth century suffered from one of the most bloody fascist juntas in Latin America.

However, the dictator J. Bolsonaro has in Brazil and supporters – representatives of right-wing political groups supported by power oligarchic clans. The extreme right, with striking regularity, which speaks of well-organized organization, all last Sunday go out to the Plaza de los Tres Poderes, located near the presidential palace of La Alvorada, to demonstrate their unity to the left-oriented majority of the people. The far-right Brazilian populations that make up the small but extremely aggressive mainstream electorate to J. Bolsonaro also express dissatisfaction with the behavior of their president. They are outraged by the too soft, in their opinion, domestic policy of the President of Brazil, J. Bolsonaro, regarding the left majority of the country.

An interesting and rather characteristic point is that the speeches of the supporters of J. Bolsonaro, despite the dissatisfaction directed against insufficiently adequate quarantine measures and too soft anti-communist steps taken by both federal and regional authorities, are held on Sundays in this place of the capital is almost the entire time span of the COVID-19 pandemic. Despite official measures of social isolation, and in connection with this – the prohibition of mass gatherings of the population on the streets, the ultra-right massively and regularly “occupied” the Plaza de los Tres Poderes. At the same time, the police did not make any claims to the participants in right-wing political actions in connection with their violation of quarantine measures. However, it was only at the very end of the quarantine time that they gathered to protest the supporters of left-wing political ideas, and law enforcement logans almost immediately began to apply methods of suppression using grenades with tear gas and weapons with rubber bullets. The indignant residents of the capital responded to these measures – stones picked up from the pavers of the square flew to the police. At the same time, a rally was held in Rio de Janeiro against the death of a black population during police operations in the favelas against the backdrop of a new pandemic of coronavirus.

During the event, protesters presented their posters with the phrase Black Lives Matter, a campaign launched in the United States. People holding posters with the words “Dictatorship Never Again” and “Bolsonaru Carries Out Genocide” did not step back in the face of regular repressions, which the police and army units, as well as ultra-right-wing militant groups, constantly conduct in the country.

At the same time, when ultra-right militants entered the business, the Rio de Janeiro police reacted very sluggishly. After the erupted verbal aggression, confrontation ensued between opposing groups of citizens. In the end, the police decided to take measures to pacify the civil conflict: between the two groups there was a police cordon, in a crowd of people, and only on one side – in the direction of those who protested against the violation of democratic norms and freedoms by state bodies, flew again grenades with tear gas.

Meanwhile, in Rio de Janeiro, police established a cordon between two groups who were demonstrating in front of Copacabana Beach. After verbal aggression between groups, security forces fired gas to disperse a group opposing the president, who held flags with the emblem “Dictatorship Never Again” and “Bolsonaro Genocide,” while followers of the head of state carried posters with the signature “Federal Supreme Court of National Shame”

In Brazil last month, more frequent demonstrations in support of the president were also consolidated around the demand of the Balsonarists to dissolve the composition of the Supreme Federal Court of Brazil. In a superficial populist imitation of a leftist protest against dictatorial authoritarianism, the ultra-right used posters with the inscription “Down with the STF dictatorship.” Their indignation was caused by the fact that, according to the court decision, about thirty searches in the houses and offices of the allies of J. Bolsonaro were carried out, the reason for which was the creation by the latter of a whole network to disseminate false and slanderous information about their opponents.

Many representatives of the Supreme Court of Brazil, as it turned out, are characterized by political sobriety and objectivity. Thus, in one of his speeches, the chief judge, STF dean Celso de Mello, compared Brazil to Germany by Adolf Hitler and accused Bolsonaro of wanting to turn Brazil into “a military dictatorship that causes everyone to despise.” Many progressive representatives of the Brazilian public are outraged by the return to the feudal clan type of government in the country, with its inherent patriarchal nature, plunging the country into a reactionary past. The patrimonial form of government, in which all power is in the hands of the supreme ruler – an individual (autocracy) or a limited group of individuals (oligarchy), inevitably leads the country to civil conflict, since progressive political forces are always opposed to reactionary forces. In this case, it is impossible for any representative of the progressive intelligentsia to stand aside when it comes to the revival of neo-fascism (a phenomenon that arose in many developing or economically underdeveloped countries in the last quarter of the 20th century). At present, a similar phenomenon is taking place: in the conditions of a neo-liberal crisis that has hit the majority of the population, the political polarization of society is intensifying. Some groups of the population and individual representatives of various social groups, which still have a rudimentary set of political and civic values, are adjacent to the left political forces. However, in conditions of mass crisis inaccessibility of education, far from all are capable of such dialectic thinking.

At present, the risk of a turn to the right of the mass political consciousness and its Nazification has become extremely aggravated again. This can lead, and already leads, to individual countries, to the predominant influence of the right-wing electorate, and to the final victory of the new neo-fascist types of government. Until recently, the greatest danger of this has classically prevailed in the least economically developed countries of the Third World. Now, when the influence of North American imperialism has shaken under the weight of internal problems and social explosions, in countries of an average level of economic development, social instability also leads to a rapid turn of the political course of government to the right …

One of the important reasons for the clash of right and left political forces that erupted on the last Sunday of May, according to the public, was the video posted on the social networks last week by J. Bolsonaro himself, where he “condemned the politicization of the Supreme Court.” His ultra-right electorate, expressing indignation at the measures of social isolation, expresses its main complaints against the policy of representatives of the legislative and judicial authorities of the country, in particular, the Supreme Federal Court (STF). These groups express dissatisfaction with the numerous facts of violations of legislative norms contained in several electronic files that have become public and expose the immediate environment of the president. 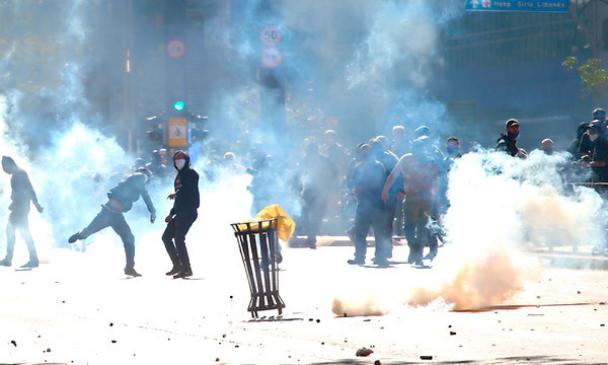 On Twitter, Bolsonaro posted a printout of a message from Donald Trump, the president of the United States, in which the American says he classifies Antifa as a terrorist organization. Antifa is an abbreviation for antifascist. The term refers to groups fighting against fascism in the world. Following George Floyd’s assassination, Trump faces a series of protests against racism and genocide against black people.

In São Paulo, the majority of infections continue to prevail – 109 698 cases. Governor Joao Doria (PSDB) announced a plan to resume economic activity, which took effect this Monday (1st). The measure aimed at making social exclusion more flexible contradicts the guidelines of medical professionals who warn of a steady increase in the incidence of covid-19, not only in Sao Paulo, but in the country as a whole.