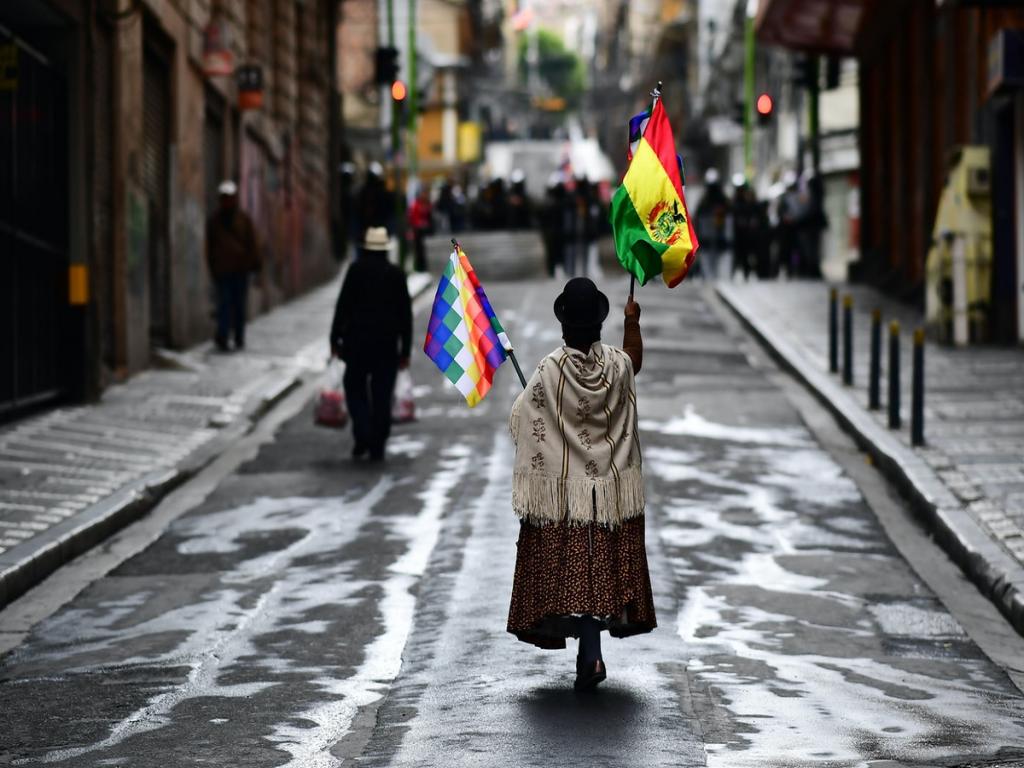 BOLIVIA: WHAT WAITS THE COUNTRY AFTER ELECTION

Official Washington – represented by the radical right-wing General Secretary of the Organization of American States (OAS) Luis Almagro – is stepping up its interference in Bolivia’s internal politics to prevent this South American state from returning to an independent, sovereign definition of its development as a country.

It is no coincidence that both the US State Secretariat and the OAS sharply criticize social popular rebel mobilizations against the interim government of Jeanine Agnes and defend the administration accused of corruption and the terrible fight against the pandemic by Covid 19. Almagro himself has shown his unlimited support. yesterday to the conspirators, and today to the government, stating that “the roadblocks that existed just a few days ago are low actions in trying to generate political profits from the suffering of people before Covid 19. It is immoral and unworthy,” said an activist from US Politics in the region, which during the coup and the subsequent repression against the militants and supporters of the MAS, did not raise their voices of condemnation. It is hypocritical to condemn now the mobilization of the population, and not the death of the conspirators.

The indefinite general strike of the first decade of August 2020 and road blockages throughout Bolivia began early at the call of the Central Obrera Bolivian COB, the Popular Front of the MAS and the organizations that make up the Pact of Unity, demanded by the Supreme Public Electoral Tribunal, to comply with the statutory election date on September 6 of the current year. However, the Provisional Government of Jeanine Agnes and her entire bureaucratic Headquarters, by prior agreement with the Supreme Chairman of the OAS Almagro, decided to postpone the elections to October 18, 2020 in order to get a temporary head start to collect evidence, to conduct a final criminal prosecution of the highest leader KB Juan Carlos Huarachi, MP Betty Janikes and former President Evo Morales for crimes against public health, with the aim of preventing any of the party members of the MAS-Movement for Socialism from participating in the Presidential elections.

The ruling party Movimiento Demócrata Social (founded originally by the Bolivian opposition governor Ruben Aguilera, who was an informal observer from the USAID organization, which also created in 2014 inside Bolivia, with the connivance of Evo Morales, a subsidiary intelligence project and a base for the formation of the current right-liberal ruling elite, – VERDES) and its political allies, openly supported from Washington by the Supreme Chairman of the OAS, the right-wing radical Luis Almagro, have already simultaneously achieved not only a postponement of the elections, but also the extension of the term of self-proclaimed President Jeanine Agnes. Postponement and Extension Strategies – Designed to ensure that conservative political forces opposing the MAS buy time to recover from their crisis and win elections, but not in a transparent way and at the expense of adhering to their established norms. the rules of the game, but rather seek to eliminate their adversary through “law” methods to disqualify the MAS-IPSP candidates, Luis Arce and David Choquehuanc; and / or prohibit MAS-IPSP by revoking its legal status. The latter implies the elimination of not only the political organization, but also organizations and social movements, in order to leave them without political representation, and then challenge this vote. Thus, in the 2020 elections, only political expressions of the ultra-right will participate, which to varying degrees and to varying degrees participated in the coup.

These pressure measures were approved at the Town Hall, held on 28.08.20, in the city of El Alto, in the epilogue of a mass march that converged on La Seja, in which, together with the COB, the National Confederation of Indigenous Women of Bolivia “Bartolina Sisa”, Unique Federation La Paz workers Tupac Catari and other left-wing youth and local organizations.

According to reports received from various sectors of the country, several strategic points, especially in the western region of the country and in the valley area, were seized by civil society organizations, which interrupted the movement of motorized vehicles. Over the next few hours, the blockade is expected to spread to most of the country.

The rise to power of Jeanine Agnes in the November 2019 coup that led to the resignation of former President Evo Morales, led to the invasion and manual control of political groups today in the Palacio Cemado, in some ways favors the interests and goals of the United States and its regional allies. A few weeks before the presidential elections (scheduled for October 18) and the percentage of support from citizens who clearly support the Movement for Socialism (MAS) candidate, Luis Arce, external and internal destabilizing groups, reinforced by intelligence services and socio-political organizations, which usually appear in election scenarios in order to support movements farther to the right, took action to discredit the Movement to Socialism – MAS and its leaders in such a way as to secure the post of head of state, either with the current de facto president Jeanine Agnes, or with the pro-American sectors, represented by supremacist leader Luis Fernando Camacho and former President Carlos Mesa Gisbert. Thus, securing control over this South American country in the direction developed by Washington.

In these weeks, we have witnessed proposals to suspend elections (which have already been postponed three times) under the pretext of the consequences of the health pandemic caused by Covid 19. An idea that arose mainly from official sectors and political partners. who staged the coup. This runs counter to social movements, workers’ organizations and the Movement to Socialism – MAS, which mobilized not to postpone the elections even further and took place on September 6. Pressure on the head of the provisional treacherous Government, Jeanine Agnes, political and informational (from his own sector), who will be entrusted with full responsibility for the epidemiological situation in the country, led to an increase in the proposal to postpone the date of the presidential election. Thus, the decision of the Supreme Electoral Tribunal (HSE) supported the “thesis on the right”.

It has been proven that the postponement of the elections to October 18 has nothing to do with the Covid 19 problem, but rather has to do with the effectiveness of the strategy aimed at increasing the time required to attack the MAS forces, discredit their political figures. notably former President Evo Morales, who has been accused of alleged sexual assault to harm his party and candidates. That harassment materialized with a decision by the La Paz Constitutional Court, which on August 7 stripped Evo Morales of the right to run for the Senate after a constitutional court in the capital La Paz rejected his 19-person election. October. The line of attacks of the ruling party and the enemies of the socialist organization MAS, the axis of which is mainly directed, to undermine the image of Luis Arce as a presidential candidate in front of his voters. Arce himself condemned the “coup” government of interim President Jeanine Agnes in carrying out “a judicial hunt against workers and peasant leaders.”

It is clear that if the pro-capitalist right-liberal candidates wins on October 18, 2020, the country will face difficult times that will involve a social outbreak similar to the one that began in neighboring Chile’s once stable and dynamic development since October this year. 2019. A Chilean Society Facing Deep Inequalities. And I mentioned Chile because it was a country that enjoyed the support and approval of the US government administrations as a kind of “model student.” This is despite the catastrophic impact of neoliberal policies on the population, especially on the most disadvantaged. A foreign policy of subordination to Washington with obvious results of social and economic inequality and structural flaws.

If the Bolivian people do not want such a scenario of a social explosion for their multi-ethnic homeland, “this Multi-ethnic Republic,” as declared by the constitution, then the choice of who will lead the presidency is not a secondary issue. At the moment, it turns out that it is undeniable that among the contenders only the socialist tandem Luis Arce-David Choquehuanca has programmatic, future-oriented, serious and profitable proposals for the entire population of Bolivia, for these millions of men and women. , which radically changed the conditions of their life during the 14 years of the Masist rule, as well as the change of the whole country in the social, economic and foreign policy spheres.

The victory of the socialist Luis Arce gives more chances to improve the situation of the indigenous population within the framework of the government’s priority plans; for example, solving urgent problems related to political representation in power. The low-income sections of Bolivian society and the villagers are the ones who look with the greatest hope at the possible presidential triumph of Luis Arce and the Movement to Socialism -MAS. An expectation full of hope that the social welfare and protection of the state will cover the various spheres of life of these Bolivians. If this is not the case, there is no need to be a visionary to imagine that dependence on Imperialist Capital, and with it internal instability and the impoverishment of the vast majority of the citizens of this South American country, will become an undeniable reality.