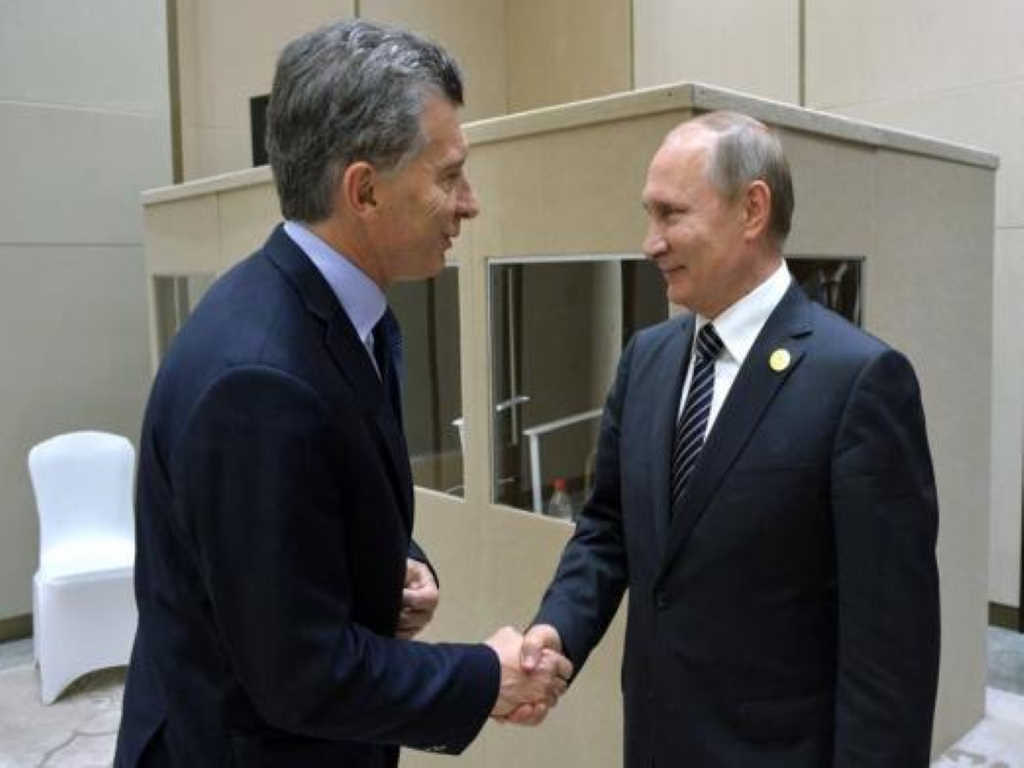 CITIZEN PUTIN, FINALLY, ACTIVELY STARTS TO LOSE STATUS IN THE EYES OF THE LEFT POLITICAL CAMP OF LATIN AMERICA

The photo sent yesterday from Buenos Aires to our comrade. Emiliano from Argentine Cordoba (the second largest city in Argentina, known for its great density of opposition parties and organizations of the left), with wall inscriptions of the Argentine left. Most recently, they stood on positions for the Russian Federation and its president V.Putin, now the situation in the left political wing of this country has radically changed …
Comrade Emiliano, this sharp metamorphosis among the young Argentine left radical groups connects with the geopolitical policy of the Russian president towards Argentina. Under Christine Kirchner, during the last years of the government, the most radical manifestation of anti-imperialist tendencies, the policy of full sovereignty of the country, Argentina’s relations with Russia were actively being established. Left-wing radical organizations of Argentina saw in Putin as a strong, principled and conscious partner. But after a series of meetings between Putin and the president, the “bloody manager” Mauricio Macri, who is the US protege, in fact – the legitimate head of the Argentine junta, many Argentines were disappointed. The Russian president, who seemed to ally many of them, is an ally of Latin American countries seeking independence from the United States, signed with M. Makri an agreement on “Economic Military-Trade Cooperation.” But after replacing K. Kirchner right M. Makri already called in the oppositional left-wing radical environment “administrador carne”, which can be translated as “manager-butcher”. It is noted: during 2016-2017, the first two years of his presidential term, only according to approximate calculations from the repression of power structures killed from 1400 to 1800 Argentines aged 16 to 30 years; missing – 2600 people. The Argentines expected at the meetings of V.Putin with M.Makri at least a shadow of the assessment of what was happening in Argentina, but – he held on to the ultimate diplomatic politez, never mentioning the name of Christine Kirchner. June 10 this year. communist and socialist leaders, comrades Patricio Echegaray, and the commissar of the Federation of Communist Youth, Jorge Pereira (who won the first place in the Argentine Parliament at the last election) said in a fiery and desperate speech: “We expressly declare: it is enough to connect any hopes with our former Eurasian partner, Senator V.Putin, – for he shakes hands and signs agreements with the criminal against humanity, which quarterly carries reports to your We want to inform you, comrades, the latest news: V.Putin and Makri signed an agreement on the purchase of small quantities of firearms, exclusively for internal armed structures.That is against you, comrades, our children -students coming out with a protest to the streets, So that Makri could continue to engage in mass sweeps of the camps of our Chilean brothers from FPMR and MIR … We have long believed in support in the person of Russia. Senator Putin, like all the leaders of the ruling classes of the Earth, are not interested in the interests of the working majority, nor are they interested in the future. They are interested only in personal BUSINESS! BUSINESS, BUSINESS … Artificially prolonged civil wars in Syria and Venezuela are only “ajetreo comercial” (literally “commercial fuss”), “selfish” disassembly of two or three people, using the state Armed Forces, the outcome of which is the death of hundreds of thousands of babies , wives and old men, for whose terrible death no one will answer … “

P.S. Argentina is currently serving a prison sentence of 3,680 Argentinians “on political grounds”, with terms ranging from 15 to 20 years. Interestingly, Argentina is a restricted area for the ubiquitous “Amnesty International” and “Human Rights Watch”.