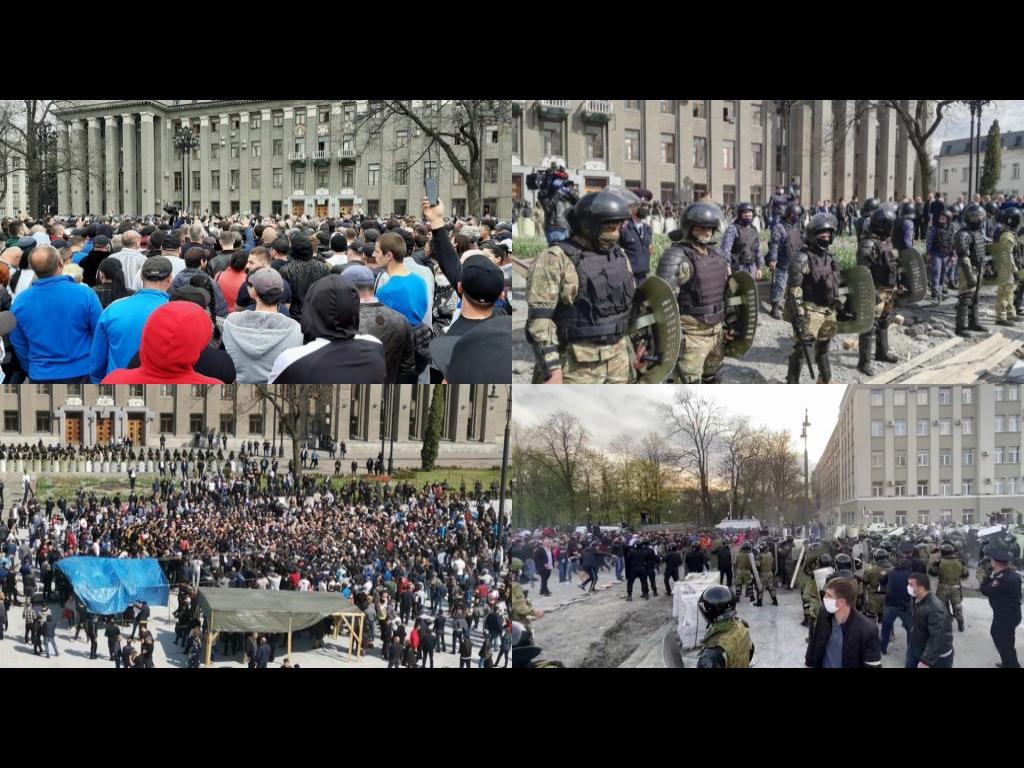 “We believe that in the Republic of North Ossetia-Alania these days people did not protest because they managed to get hungry in two weeks … The Alanian riot ripened for a long time, and the situation with self-isolation in connection with coronavirus only served as a catalyst”
A. K.

On April 20, 2020, one of the first protests in the world against the “self-isolation” regime took place. In the Caucasus region of the extreme southern Russian frontier – the Republic of Alania, in its capital – Vladikavkaz, about 2,000 people went to Freedom Square with the demand to cancel quarantine and return to work. The head of the republic met with protesters, but the rally still ended in a clash with riot police, as a result of which 70 people were detained.

“People’s Gathering” – that’s what the organizers called the demonstration. The protesters called for the abolition of the regime of self-isolation or assistance in the form of social packages for every citizen of North Ossetia-Alania who is sitting at home without work.

People gathered courage and went to the main square of their city at the call of a well-known public figure, opera singer Vadim Cheldiev. The authorities banned an unauthorized rally, all the more so – no one could have imagined that people would take such a number to the streets of the city in protest. In groups, one at a time – residents of the Ossetian capital were drawn to the center of Vladikavkaz. First, from the masses of the protesters there were demands that President Vyacheslav Bitarov, a direct protege of the federal authorities in the region, come out to them. They expected him to do an elementary thing: he canceled the so-called self-isolation, which leads to the fact that people have become half-hungry and hungry. Moreover, not all residents of Northern Alania are in isolation: workers from one or two specialized enterprises that belong to the leaders of the republics continue to work, and people don’t understand the reasons for such arbitrary quarantine measures: there is either a pandemic or it doesn’t exist, and then it doesn’t exist at all we understand the strange actions of regional and federal authorities in a country where the level of employment of the population and the general standard of living leave much to be desired…

President Bitarov came out, but, in order to sincerely communicate with people, he began to repeat the common places inherent in coronavirus information hysteria in the same way. At the same time, not a word was said about the main thing: how, if not infected, people can survive without a spare economic “pillow”, such as that of the gentlemen of officials. How to feed them their children when stocks run out. Natural activists of the rally proposed that economically vulnerable people have the right to a social package. Bitarov did not speak about anything like this, almost listing the dangerous consequences of violation of self-isolation with a tongue twister. the words. Then screams flew from the people: “Bitarov – resign!”. Bitarov retired, but not to resign, but to the Government House. From there, by the way, from the upper floors a rally was filmed on a telephone camera by one of the administration’s employees, who almost immediately posted the video in the social network. Networks, – and viewers heard the voice of an official behind the scenes, insulting the protesters…

Soon, police special forces were taken to Freedom Square, and – curiously, according to reports from Vladikavkaz, the local authorities did not use local authorities, but from neighboring regions – Stavropol Territory, Rostov Region. Apparently, prudent government officials of the highest echelons of power of the republic are well aware of the local mentality, on the basis of which local riot police could try to avoid following the order to suppress the rally. In response to the voices of riot police officers demanding an urgent “dispersal”, the assembled responded with indignant words that they were in their hometown and had the right to demand an answer from the authorities on what to do in a difficult situation. Police officers used the usual practice that had long been tested in other cities with a population of over one million people – to try to grab the most active from the crowd in order to deactivate the protest. But, according to the ethnocultural Ossetian mental code – in the Alan Republic – it is not accepted that any violent actions restricting one’s freedom remain unpunished by the Ossetian community. Stones flew into the riot policemen, pulled out of the unfinished pavers on the move, and new men rushed up to the groups of people where the arrests began. The men surrounded the riot police and repelled the detainees. Police officers who did not expect a rebuff were initially taken aback. They finally managed to get people to disperse only in the evening. Only after the security forces managed to catch one at a time, 69 people were arrested, plus one more, Vadim Cheldiev, who was detained in advance, whom the protesters demanded to be released. 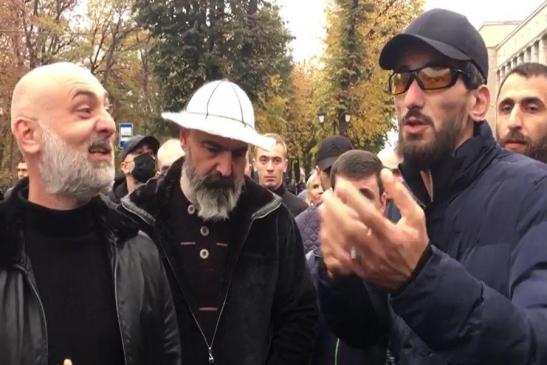 State structures of the Russian Federation are actively preparing to meet and suppress in the most brutal way the second wave of mass protests in the Republic of Alania. So, according to the latest information from our sources in the Southern Federal District; from the territory of the Rostov Region on April 27, 2020, a contingent of the 22nd separate special-purpose guard brigade will be transferred to Vladikavkaz to strengthen the security forces already there.

As a result of mediocre, antisocial actions on the part of the ruling classes in North Ossetia, as in other regions of the Russian Federation, perhaps the first time in recent years there has been a situation that outrages and makes more and more social groups of people “angry citizens”. The fact that for the first time an active protest spilled onto the streets of Vladikavkaz, the southern outpost of the Russian Federation, testifies to many things. In addition, people in the Russian Federation are no longer ready to remain silent in response to everything that the government decides to do, without providing the population with basic means of protection against a pandemic and without improving the crisis situation in healthcare, when as a result of “optimization” throughout the country it has decreased several times number of hospitals, and, accordingly, beds. The South Caucasus Republic here seems to be a litmus test that reflects the level of protest moods when it goes off scale. And this only speaks of one thing: now that the authorities in the Russian Federation have taken internal political, unsure radical steps related to the exaggerated epidemiological situation in the media, the long-term deep trust between the people and government circles has come close to the point of no return. And – either the authorities will have to make dialogue and concessions, or – to take extremely unpopular measures to “tighten the nuts”. The incident shows that resistive opposition groups of citizens are formed throughout the Russian Federation, ready to actively protest and defend their rights. Especially if it comes to the real conditions of violation of the most important human right – the right to life, which, in fact, will be disputed by the course of events – after all, with the extension of quarantine measures, many of the residents of the Russian Federation will go over the threshold of poverty.

It is curious that one of the demands of the protesters in Ossetia was the release from prison of one of the city activists – Vadim Cheldiev. Authorities accuse him of an unusual charge: he is accused of “denying the presence of a coronavirus.” However, there is nothing like this anywhere among the newly adopted laws – and even that would be at least strange. Citizens’ demands of an economic nature arose as a result of a long period of “selective” quarantine self-isolation, when former citizens who were forced to stay at home were unable to provide their loved ones and children with the most necessary. People demanded either the introduction of an emergency, and then – the appropriate economic situation measures to help citizens, or – the manifestation of active initiative measures that would naturally be expected from the authorities, chosen in a legitimate way. Indeed, such initiatives of material support to the most socially vulnerable citizens are practiced in most countries.

As a result of a breakdown in communication between the upper echelons of power, as well as representatives of its lower “floors”, who, unlike the majority of the population, have confidence in their own future, the situation in the country can get out of control, in the modern information society distance and censorship erased, news spreads lightning fast. What is happening in one of the republics of the Russian Federation, a YouTube video posted by a cynical official, objectively causes outrage among the Russian public. People already in social networks actively express their solidarity with the inhabitants of North Ossetia and their indignation at the actions of regional authorities who violated the elementary rights of their electorate – the right to objective information and the right to express distrust to those in power. It seems quite natural the development of events in Ossetia, when the general economic requirements adopted political requirements, and people began to demand the resignation of the head of North Ossetia. Indeed, quarantine measures are more reminiscent of political ones, and self-isolation is very selective: some are deprived of work, and they run out of money, while others continue to “divide the market.” At the same time, enterprises owned by the head of the republic operate, but there is a ban on the movement of public transport (with the exception of a small fleet of minibuses). In addition, as our comrades from Ossetia tell us, during self-isolation, electricity and gas were cut off in some areas of the capital, for some reason. Perhaps, for the debts that have developed among the population on housing and communal services payments, which are growing constantly and disproportionately to wage growth. Apparently, for residents of Vladikavkaz this attitude to themselves – could not leave indifferent – they have a sense of dignity, responsibility and – the expectation of responsible actions from others. Especially if this environment is lawfully elected power structures.

The population has natural questions that no one is going to answer: if in such a difficult time, people who have run out of food supplies and who have nowhere to work have no help from the state, then – where do our taxes go? Why is the National Welfare Fund not used to help people? 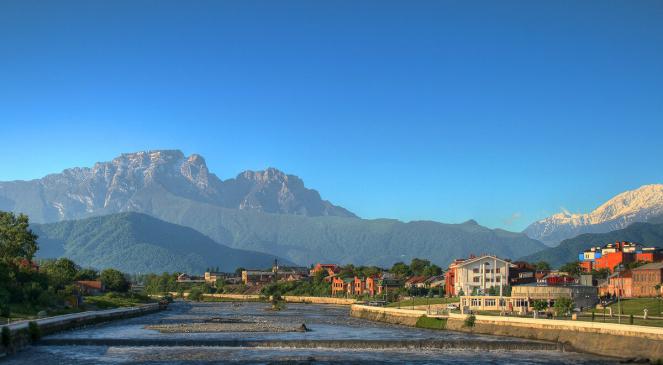 A day later, after the events described in Vladikavkaz, April 22, the Communists of the neighboring Republic of Kabardino-Balkaria and their supporters celebrated the birthday of Vladimir Lenin, despite quarantine measures. At the same time, they expressed their support and solidarity to the people of the fraternal Caucasian republic of Alania, supporting the growing protest activity in the struggle for their civil rights. The restrictions introduced and the difficulties and omissions on the part of the authorities, of course, are pushing people to protest, ”said the leader of local communists, Boris Pashtov. According to Comrade Pashtov, events similar to those that occurred in North Ossetia are already brewing among the people in Kabardino-Balkaria: the population “is deprived of the opportunity to work, while the federal government has withdrawn from any help to people, shifting everything to the regions. And what can regions do? Nothing. Corruption flourishes in the south of Russia and the North Caucasus”, – the leader of the Kabardino-Balkarian Communists believes. He also noted that today the masses of the simple population of the regions of the North Caucasus and Southern Russia, as, most likely, other Russian regions, are extremely dissatisfied with many decisions adopted by the federal and local authorities, for example, raising the retirement age.

For their part, the commissars and volunteers of the network of the South Russian and Caucasian sections of the International of Combat Social Action SOUTH-EASTERN STAR are ready today to provide all-round – informational, technical and other necessary support to interregional popular protest movements.