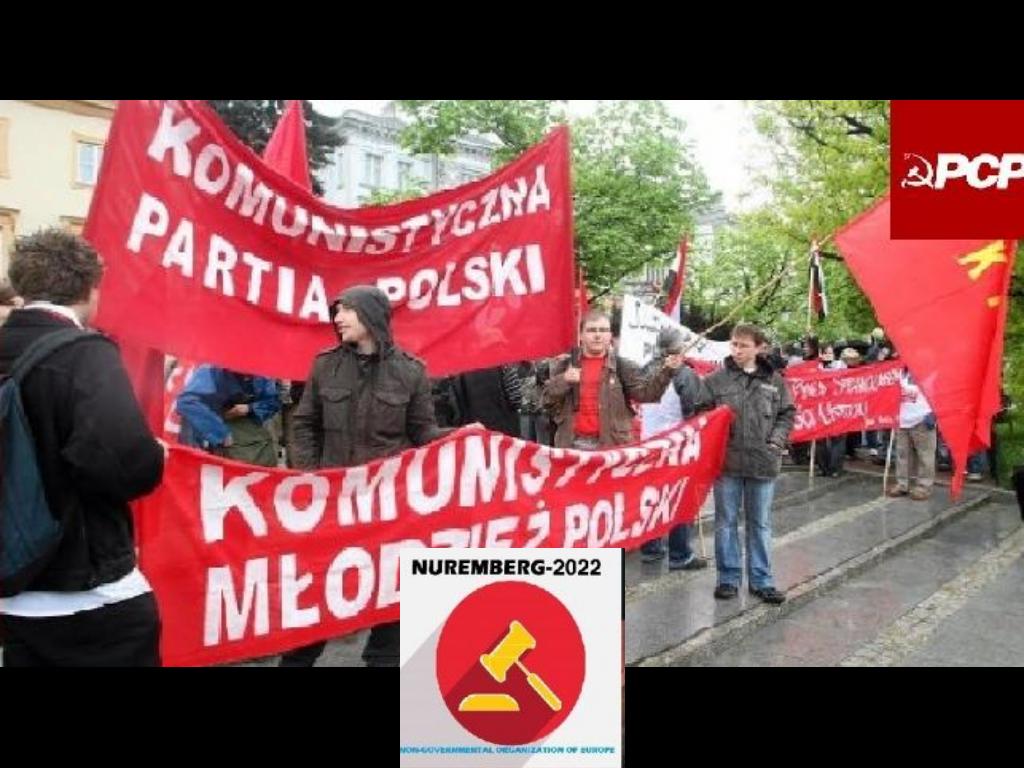 AGAINST AGGRESSIVE DECOMMUNIZATION IN POLAND AND SLOVAKIA

Our Our adherents from the Communist Party of Slovakia (whose web resource was liquidated literally an hour before this publication) – with the demonstrations of the last December days, express their solidarity with the struggle of the Communist Party of Poland – for legal and physical survival in the political space of the EU. By analogy with Slovakia, in connection with the recently adopted amendment to Act 125/2006 Coll. (the so-called Anti-Communist Law), attacks by neo-fascist authorities are increasing in neighboring Poland. Despite the fact that the Polish government claims to be “democratic”, it is absolutely intolerant of dissidents. The Polish government, bringing down all the might of the state machine of repression on the left, thus undermines the legal and legal field in a “democratic” country in which there is no place for the existence of communists on the political scene.

The Prosecutor General of Poland Zbigniew Zebro appealed to the Constitutional Court of the Republic of Poland with a statement about the non-compliance with the country’s constitution by the communists – from his point of view, the goals and activities of the Communist Party of Poland still existing in the republic are anti-constitutional … However, as can be seen from this appeal, the Prosecutor General Z. Zebro did not dare to shoulder all repressive responsibility on his own shoulders. In his appeal, he had to hypocritically refer to the mythical ”demands of citizens” and point out that supposedly ordinary Poles are demanding a ban on the checkpoint … This is not only a signal for new persecution for political reasons, but also – the purposeful participation of senior government officials in law – the populist work of propaganda, designed to influence the Poles, further strengthening anti-communist sentiments in the country. This is one of ten points named by the famous left-wing scholar Noam Chomsky, which he singled out as the main directions in the management of the masses by the dominant capitalist ruling elite. At this point, the scientist says that representatives of a small stratum of the ruling financial elite, international and national, skillfully use the mechanism of infantilizing the masses. Having great opportunities and resources concentrated in the hands of the transnational capitalist class, including modern academic science serving their interests, he can afford a scrupulous and diversified study of the human phenomenon, behavioral motives and laws. Scientists in the service of Capital, studying the human phenomenon from the point of view of different disciplines – sociology, psychology, neurophysiology – have found that there are serious tendencies in the correlation of external conditions of instability and psychological instability of an individual who consciously wants to feel like part of the human mass or crowd. As you know, in the capitalist neoliberal value series, the laws and quirks of the free market are put to the greatest height, inevitably causing in society the determinant of the psychological dependence of the behavior of the masses on the variable of market relations. Here we observe how homo sapiens turns into an ideal consumer – an absolutely ignorant creature living with elementary emotions and a thirst for novelty, who has the psychology of an eternal child. Therefore, convincing him of anything becomes a matter of the expected behavioral technique being developed.

The countries of the former eastern block gave birth to experimental conditions in their purest form. A generation of Poles has been indoctrinated, for decades, that they do not tolerate left-wing people, especially communists, and the masses are becoming more intolerant and society more and more reactionary.

The communists of the Slovak Republic, still operating legally in their country, today express their condemnation of the work of state bodies in Poland, condemn their efforts to anti-democratic ban on the Communist Party of Poland.

ICSA “SOUTH-EASTERN STAR”, in turn, by the collective decision of our International Coordinating Commissariat, supporting the initiative of the communist comrades from Slovakia, informs about the restart from the beginning of 2021 of the Non-Commercial Anti-Nazification Project “NUREMBERG-2022”. In the international legal and information field, we are ready to join the struggle for repressed comrades-comrades in Poland. We also invite you to join in solidarity with the communists of Poland and other comrades living in the territories – Slovak, Serbian, Macedonian, etc. – in the resistant activity we have been carrying out for two years. Our struggle against fascisation, the Nazification of the whole world extends to the situation in Latin America, which is again turning to the right, and to Southeast Asia, where in countries such as Indonesia, the Philippines and Malaysia, misanthropic dictatorships ruled by Nazi intolerant of dissent …

The parameters of our subsidiary project “NUREMBERG-2022”, including, of course, concern the criminal nazification aspects of the domestic policy of the Republic of Belarus and the Russian Federation.

We invite everyone in solidarity with the fight against the new fascism to participate in our revived project “NUREMBERG-2022”, a detailed description of the program strategy of which will be published in several languages on December 15, 2020.

We convey a message to the Slovak and Polish comrades, which the whole world understands: PROLETARIANS OF ALL COUNTRIES, UNITE AND PREPARE FOR ACTIVE JOINT RESISTANCE AGAINST REACTION!